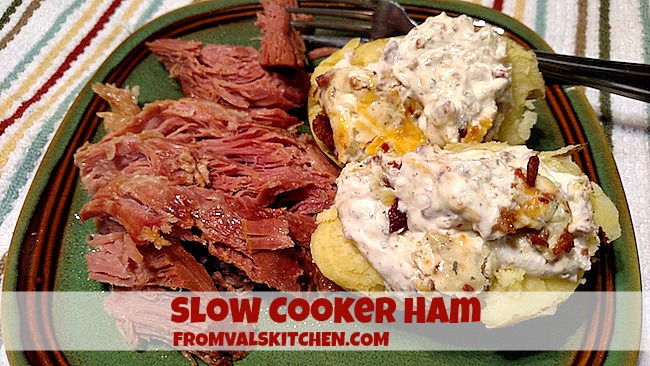 I had a big ham in the fridge that I got from the store for almost nothing over the holiday break. I wanted to cook it before it went bad. But, I had a full day planned on that day and didn’t have time to stay home while a ham was in the oven cooking for hours. So, I decided to make it in the slow cooker. I started with a shank portion ham that was just over 11 pounds. I had to trim it down to 10 pounds to fit into my oval slow cooker. We’re big ham fans. Generally ham is a tad salty. I expected this ham to be a bit saltier after cooking for so many hours in its own juices, so I tossed a little bit of light brown sugar in there. You can easily omit the sugar if you like, I’ve made this slow cooker ham recipe both with and without it and you can decide by going with your family’s preference if they like their ham sweeter or not. The meat was super moist and tender, and required no knife to cut. Here’s how I made it.

Mix the sugar and water together.

Place the ham into the slow cooker with the flat side on the bottom and the bone on the top.

Pour the mixture of sugar and water over the ham into the slow cooker.

Cook on low for 6-8 hours. The ham I used comes already cooked, so the time in the slow cooker only serves to bring it to the right temperature for serving and eating. I cooked my ham for 8 hours and it turned out just right – there was plenty of meat that was just right, and some with slightly crispier edges which is how my husband likes it.

Remove the ham from the liquid that has formed, letting the excess drip off. (There will be a lot of liquid.)

The ham will be really easy to remove from the bone, I pulled it off of there with two large forks quite easily. You can trim off any areas you don’t like by pulling them off with your forks or if you prefer use a knife.

Serve immediately with your favorite sides or as a sandwich. 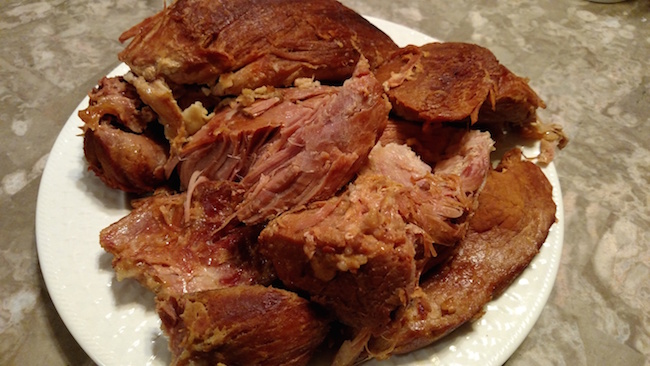 I wonder if this would work in a stock pot (I don’t have a crock pot0. it does sound like a great way to make a ham and mighty tasty as well!

I would think that it would work in a stockpot if it were on low long enough.

It was super tender, we didn’t need knives.

It’s super easy, I love traditional ham made in the oven but this was great because I didn’t have to stay home because the oven was on.

Love using my slow cooker for ham. Or a pot of beans with ham in it!

That reminds me of soup. Do you use navy beans?

This is my mom’s specialty! We look forward to it every Christmas. I will try your recipe and, who knows, I might impress my mom with my cooking skills. LOL.

This looks delicious — I am seeing some great slow cooker recipes at the moment – I need to get one! Kaz

We often added canned pineapple to our bakes hams. I wasn’t sure if it would make things too soupy in the slowcooker so haven’t tried it yet.

Ham! With these frigid temps, I wish I had that ham or at least its bone to make soup.

This is a great recipe for the cold winter months when you want something hot and comforting. My husband would love this!

I so need this in my tummy right now!! We love ham at our house and this would make my life easier! Definitely a must try 🙂