Electric pressure cookers are the hottest small electric appliance out there. But how do you know which one will be best for you? I can help! The From Val’s Kitchen Electric Pressure Cooker Buying Guide has the information you need to know on all of today’s most popular models, listing important features along with my reviews of those models. This guide is frequently updated so please check back often!

What is an electric pressure cooker?

Is an electric pressure cooker safe?

Today’s electric pressure cookers are much safer than the stovetop models of yesteryear. The modern electric pressure cooker is a self-contaned unit that sits on the countertop and plugs into a regular household outlet. Those old horror stories of things exploding all over the kitchen ceiling are a thing of the past, as numerous safety features have been added.

With most electric pressure cookers today, you cannot remove the lid while the unit is under pressure, you have to wait until the pressure has been released. Most models today even have temperature sensors built in that will help prevent food from burning.

Is an electric pressure cooker easy to use?

Yes and no. There is a little bit of a learning curve with electric pressure cookers. They need a little time and patience to get to know. They look a lot more intimidating than they really are.

Many modern models have digital controls that make use and adjustment fairly straightforward and easy to monitor. Just press a couple of buttons and your food will almost cook itself. Using an electric pressure cooker is perfect for busy days and nights where you just donb’t have time to spend an hour standing over the stove.

Many electric pressure cookers even have sensors built in that keep temperature in check and keep you from burning you food in cases where there isnít enough liquid in the pot to build up the appropriate cooking pressure. Instead of continuing to heat on high and burning the food inside the pressure cooker, it simply switches to the keep warm function, allowing you to add liquid and start over.

What are the pros and cons of using an electric pressure cooker?

The biggest upside of using an electric pressure cooker is that it cooks food quickly. Other advantages are that the food stays moist. Using this small appliance also reduces heat in the kitchen when compared to cooking on the stovetop or in an oven. Using steam to cook results in food with deeper flavor, as well as a higher nutritional value because vitamins are not dissolved away. Further, steam cooking results in more colorful food, as the food doesn’t oxidize as a result of being exposed to air. The high temperature of the steam is also known to kill most harmful micro-organisms, making it easier to prepare food safely and even do things like sterilize baby bottles.

The downside of an electric pressure cooker is that is won’t brown things, and it won’t give you food that is crispy or crunchy.

Is an electric pressure cooker worth the money?

Yes. An electric pressure cooker is definitely worth the money if you’re going to use it.

An electric pressure cooker empowers you to make a home-cooked meal without spending hours upon hours in the kitchen. Most meals are almost hands-free and require no intervention once cooking is underway. Cook time for many types of recipes is reduced when compared to other cooking methods such as stovetop, oven and slow cooker. And, an electric pressure cooker will not heat up your house like using the stovetop and oven do.

How To Choose The Right Electric Pressure Cooker

The most important factor is probably size. You’ll need to consider the size of your family, the size of the meals you cook and if you do things like meal prep or batch cooking.

There are a number of 8-quart electric pressure cookers available. These are great for larger families, or if you do a lot of meal prep, freezer cooking or entertaining.

Along with size, you’ll also need to keep in mind any special features you know you will need (or won’t need). Some electric pressure cookers have a yogurt setting. A couple even have a risotto setting. Select models will integrate with your cell phone through an app, allowing you to control functions from your phone.

Another really important feature for some is the material that the inner cooking pot is made of. Some units have a stainless steel cooking pot. Other units have a nonstick pot.

If storage space really matters to you, whether or not the unit has a removable power cord may be important to you. I personally prefer units with a detachable cord as I can put the cord inside the unit when I’m done and they take up less room.

What about all of those buttons?

Below are some of today’s hottest and most popular electric pressure cookers. Click on the model name and you’ll be taken to my review of that model.

Have a question about electric pressure cookers? Read my post 9 Things To Know About Electric Pressure Cookers!

Still have questions? Leave a comment below and I’ll try to help answer it. 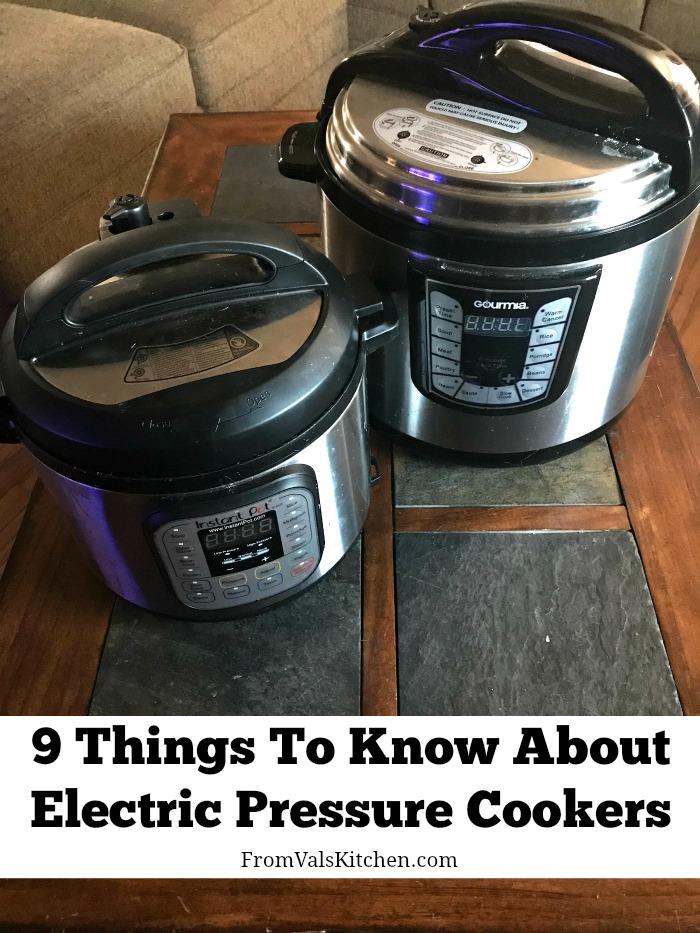