Hellmann’s is my favorite mayonnaise in the world. Recently I got the opportunty to try their latest product – Hellmann’s Southwestern Ranch Flavored Reduced Fat Mayonnaise. 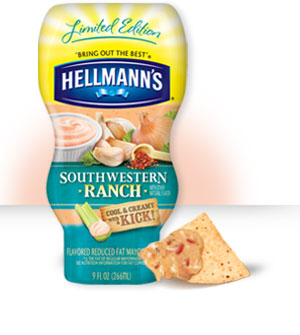 Hellmann’s® products have been staples in American kitchens for generations. The brand’s flagship product, Hellmann’s® Real Mayonnaise, is the best-selling mayonnaise in the United States.

Mayonnaise is said to be the invention of the French chef of the Duke de Richelieu in 1756. While the Duke was defeating the British at Port Mahon, his chef was creating a victory feast that included a sauce made of cream and eggs. When the chef realized that there was no cream in the kitchen, he improvised, substituting olive oil for the cream. A new culinary masterpiece was born, and the chef named it “Mahonnaise” in honor of the Duke’s victory.

In 1905, two years after arriving in the United States, German immigrant Richard Hellmann opened up a delicatessen in New York City. His wife’s delectable recipe for mayonnaise was featured in salads and sold in the deli, and the condiment quickly became so popular that Hellmann began selling it in “wooden boats” that were used for weighing butter.

Originally, two versions of the recipe were sold, and to distinguish between them, Hellmann put a blue ribbon around one. The “ribbon” version was in such high demand that in 1912, Hellmann designed what is today the iconic “Blue Ribbon” label, to be placed on larger glass jars.

I received a sample of Hellmann’s Southwestern Ranch Flavored Reduced Fat Mayonnaise. It’s creamy as I expected, but tastes a bit different. It’s zippy, meaning it’s got a flavor almost like you find in ranch dip made with dip mix or premade with sour cream. It’s not over the top but it is zesty. If you like zesty flavor, this mayo is for you.

The folks at Hellmann’s have shared a recipe that is perfect for tailgating and parties at home when you can’t be at the game. 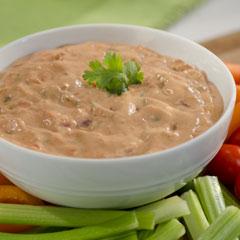 Combine all ingredients in medium bowl. Serve, if desired, with tortilla chips or cut up veggies.

Aquaponics Garden – A Fun Way To Learn At Home