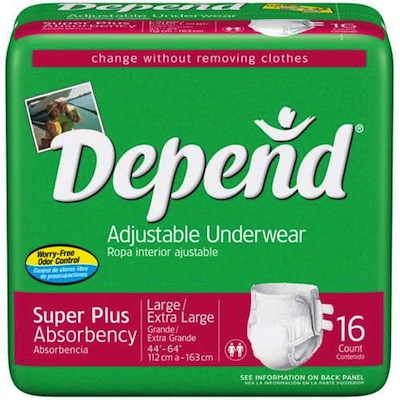 We’re still working hard at potty training CJ. He has no problem going pee in the toilet and staying dry through the day but he doesn’t poop in the toilet. He can make it through the whole day without an accident. The poop accident usually occurs after he gets home from school. We have him sit on the potty every half hour. The timing never works. He’ll sit on the potty for as long as we make him and doesn’t poop. Within minutes of getting up he has an accident. Because of this we’ve had him in Pull-ups at night, until recently. The problem is, he’s outgrown them. One cheek literally sticks out, uncovered. So I started looking for an alternative. While in the grocery store I decided to take a look at Depends, which I saw had a type of adjustable underwear. I picked up a package of the smallest ones they make and brought them home.

As soon as CJ saw the Depends he got very upset. I put them on him the first night shortly before bed. Not fifteen minutes later he came out into the living room with no pants on. No pants, and no Depends underpants. Naked, that is. We asked him where the pull-up was. He pointed at his privates, said “no pants” and marched back into his room. He brought a pair of big boy underwear out, which he wears to school every day, and said “pants”. We got underwear and put them on, explaining for the gamillionth time that he needs to try hard to poop when he goes to the potty. Fifteen minutes later he has an accident and we’re back to scrubbing poopy underwear.

So I had a bright idea. I figured if we put the Depends on him enough and he hated them enough he’d start pooping in the potty. Nope. That hasn’t worked. So far all we’ve accomplished is spending money on Depends for him to take them off and run around naked. For some reason that we haven’t been able to figure out, he HATES the Depends. So right now we’re letting him wear the underwear, because it’s better than cocoa puffs on the floor. This of course means that we’re still scrubbing underwear. Anyone have a suggestion for something he might wear at night and not hate? He’s pretty tiny and 70 pounds.

A Tip On How To Park Your Car

I’ve got one that will pee in the potty all day but waits for naptime to poop when I put him in a diaper or pull up. It’s FRUSTRATING beyond belief. I feel your pain. Does he have certain times of the day that he goes? You might try putting him on a potty schedule based around his usual times if he has them? Good luck.

He usually poops between 3:30 and 5. We’ve had him sitting on the potty every half hour for five minutes at a time, trying to have the poop happen while he was sitting there. No luck yet, he goes right after sitting. I know there are times when he farts that he tells us he’s pooped, so I’m not 100% sure that he fully realizes the sensation of having to poop before pooping.

Maybe you could line his big boy pants with a disposable pad made for adults. They sell them as bed liners, and could cut to fit and taped in place. Sort of like making your own disposable diaper. Then put his big boy pants on over the top of that. I don’t know how old your child is, but my son was almost 5 years old before he was poop trained.

My son is 11. Interesting suggestion, thanks! We’d thought of those training pants that have like a terry on the inside and plastic or rubber on the outside but I haven’t seen them in years.

I had this same issue with my son who FINALLY potty trained by literally having NO diapers for two weeks. The pediatrician said it would be a messy problem with poop but since he was four years old, it was time to say no more diapers. So we did one whole week with pull ups at bedtime, big boy undies (not pull ups) during day. He refused to poop on the potty but he did awesome at peeing. Eventually after one week of no diapers & pull ups only at night he decided that he no longer wanted pull ups at bedtime, I was NERVOUS but he did AWESOME. Within two weeks of doing this, and lots of messy undies he finally started pooping on the potty on his own. It sucked, it was messy but two weeks worked. That is what seemed to work for us… but see my son didn’t poop overnight so IDK is that what yours is doing?

He usually stays dry in the overnight. We’ve gt him in underwear for the overnight. But there’s a period between later afternoon and bedtime where we have the problem.

I heard that Huggies makes pullups for bigger kids…and I just googled it for you
http://www.goodnites.com/na/Bedwetting-Products/Underwear.aspx?WT.mc_id=GNG&WT.srch=1
They go up to 125 lbs and should offend your son way less than depends 🙂
If that fails, you could try contacting one of the crafty folk who make handmade reusable diapers with liners–I bet someone could make one for you in a bigger size.
Good luck!

Now interestingly enough it’s the size Large GoodNights that my son outgrew, one of his butt cheeks is always hanging out. I don’t recall the package saying to 125 lbs so will have to double check it.

Gosh, I wish I had an answer for you. My son had a hard time going poop also…he was very constipated and miserable. One day it just clicked for him. Sending you hugs because I know this must be a huge challenge.

Thanks Tammy. We’re hoping it just clicks at some point here too.

I wish I knew what to tell you. I’m stumped.

I was thinking the pull ups for bigger kids as well. I know I see them in the stores. Or, good-nights. It will hopefully just click soon.