The product(s) featured in this post was provided to facilitate my review. Please note that any personal opinions reflected in this post are my own and have not been influenced by the sponsor in any way. 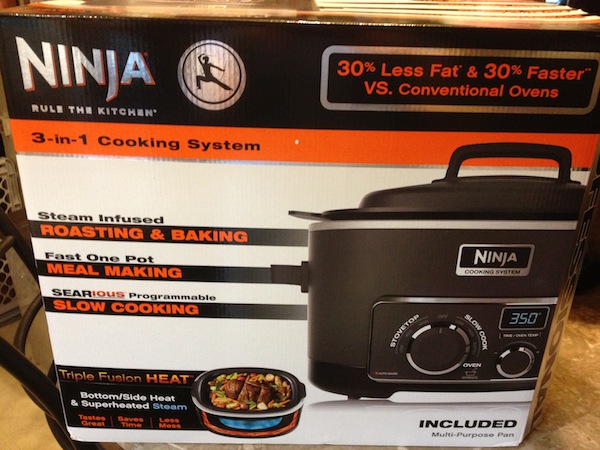 Meet the Ninja 3-in-1 Cooking System. 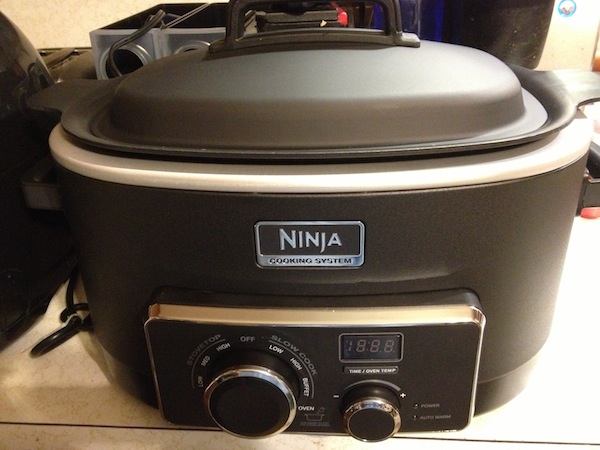 I learned about it when I first heard about a new product called the Nutri Ninja, which is a new single serve juicer capable of blending whole fruits, vegetables and ice into nutrient-complete juices within seconds. Not only does it make nutrient-complete juices, but it also can make sauces, dressings, dips, purees and frozen desserts. While I was on the Ninja Kitchen site checking out the Nutri Ninja I stumbled across the 3-in-1 Cooking System and fell in love with the product concept. Well, now I’m in love with the product itself.

That cooking system right there is (pardon my french) badass! It can do all sorts of things! It’s like having at least three appliances – stovetop, oven and slow cooker – all in one. The stovetop can be  set to cook on low, medium or high. The smaller knob is what sets the oven temp if you’re using oven mode as well as sets the kitchen timer. The oven temp can be set between 250 and 425 degrees f. I haven’t used the slow cooker mode yet but did see that it has low, high and buffet settings as well as an auto keep warm feature. One of the coolest things about this system is that you can switch between the three modes by just turning one big knob. There’s no need to change pans or anything.

This system is more convenient than the three appliances I mentioned because of how fast it cooks and how easy it is to use. That’s because the Ninja 3-In-1 Cooking System uses an advanced steam technology that some restaurants use, which is what enables it to prepare meals so much faster. The system heats from the bottom and the sides at the same time. The system creates a very hot steam that makes for juicier meals that are also healthier because they have less fat.

I have been using the 3-in-1 Cooking System every night for over a week. Every night it manages to surprise me. Meals have been so easy to make with this system. First of all, it’s summer. I don’t like to heat up the kitchen during the summer, so don’t rush to turn on the oven or stove. No need for either with this.

The Ninja 3-In-1 Cooking System is super easy to use. Just take it out of the box and you’re ready to use it. The first night I used the Ninja cooking system I used a recipe in the little cookbook that comes with the system, but modified it. The recipe was for spaghetti and meatballs. I made spaghetti and meatballs but made it in an alfredo sauce. Here’s how I made it. 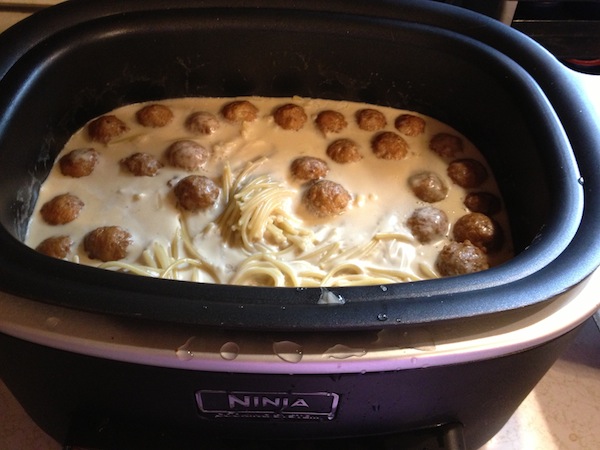 Pour the water into the pot.

Place spaghetti, sauce and meatballs into the pot. 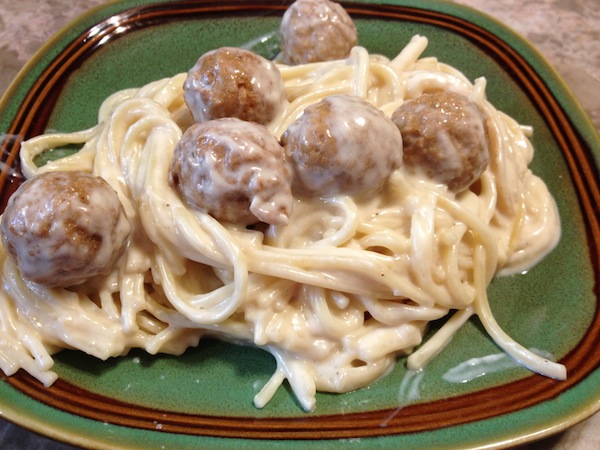 The dish was delicious. My pasta was exactly the way I like it, a tiny bit softer then al dente. I couldn’t believe how fast it worked. For this particular dish I probably would have taken about the same amount of time to make it on the stove. But by using this my kitchen wasn’t full of heat and steam from using the stove and oven. And I didn’t have multiple pots to wash, I only had one. Oh by the way. The nonstick pan in the Ninja 3-In-1 Cooking System is really easy to clean!

This baby rocks, and it rocks hard! I am becoming obsessed with it. Stay tuned, I’ll be sharing some of the dishes I’ve come up with for the next several days. They include Chicken and pasta, Monterey Chicken and potatoes, Chicken Broccoli and Cavatelli, Salisbury Steak, and London Broil and potatoes.

I bet you’ll be as surprised as I was at how capable this is and want one for yourself!

What meal would you try making in the Ninja 3-In-1 Cooking System first?

I am super jealous. I have wanted a Ninja for ages now. I hear such good things!!

That’s an amazing cooker. I would make bbq ribs.

That sounds so good. What a neat product. I am sure there is so much you can do with it. I look forward to reading more about what you come up with!

That is pretty awesome! Maybe I will ask for it for Christmas!

I really want to get this system! It looks like it makes some killer meals with less cleanup and less electric.

I want this!!! It looks awesome and very time saving- thank you!!

Holy cow those meatballs look amazing! I had no idea Ninja had a system like this, I am intrigued.

I have never cooked with a Ninja but have heard great things about it. Your pasta looks amazing, too!

Looks delicious! I’ll have to try this cooking system!

My daughter has a ninja blender and loves it. I really trust the Ninja brand!

I’ve heard really good things about the Ninja brand. I’ve never used anything Ninja, but I have a few friends with Ninja blenders, and they love them. I’ll have to check this out.

Badass, indeed! I love that this Ninja can bake, slow cook, and make one pot meals. Love it!

I love this! With a blog and a four year old daughter, a cooker like this is exactly what I need.

Your meals always look so good. I have NO idea how I would choose what to cook in this monster first, but I LOVE it as much as you do and I’ve never even used one. I want one for Christmas so bad! I think it will help get dinner on the table, for sure!

What an awesome cooking system. I totally want one now.

This looks so awesome and I would love a new gadget to play with in the kitchen.

I’ve been hearing a lot of great things about this type of cooking and the ninja. How easy is this, wow! I need to get myself one for Fall!

Oh I’d be using that 3 in one cooking system almost every night! I seriously love the 30% faster cooking!

This looks like a must kitchen have! I so need to get one, I just do not have the time to cook, I like the idea of dump and cook!

This spaghetti looks so tasty. I wouldn’t mind having a Ninja!

In the wibytwt months my slow cooker is my bff. I will have to give this recipe a try

No way! That’s just awesome – it saves so much time and dirty dishes! No wonder you’ve been loving this thing!

First time I have heard of this and it sounds fantastic. I want one now.

I’m all for not heating up the kitchen. I didn’t know there were three modes of cooking in that!

Something for hubby with loads of fresh veggies and meat perhaps.

That pasta looks so good! I’d love to have one of these for my kitchen.

I have wanted one of these! I keep seeing it and always wonder how well they work. It’s so hot here, anytime you don’t have to heat the house to cook, I’m in! I love my Ninja Blender. It’s good to see you like this!

That looks delicious! I’ve seen this and heard good things about it, I might have to either borrow one to check out myself or just get one!

Your meal looks great! I would love one of these to cook my food in!

That cooker looks really handy! I can’t wait to try your easy recipe!

I love kitchen appliances so I am going to have to put this on my want list. Maybe I will ask Santa to bring me a Ninja this year!

my crock pot is dying and i think we’re heading to the ninja side when it finally dies. i love the ninja!

This looks absolutely amazing! Mmm, I could go for some of that now!

Wish I had brought one camping–it would have so simplified things for meals after long times out and about. I love pulled pork, corn, baked potatoes and would plan accordingly.