Fellow Tristate Bloggers member Krista of The NYC Talon was kind enough to stand in for me at this event. This is a guest post written by Krista. 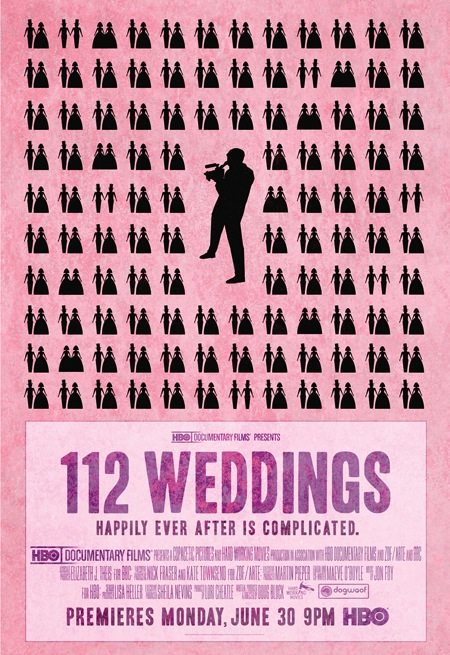 Picture this – a beautiful bride and a nervous but equally handsome groom, both surrounded by friends and family and all the hope of embarking on a life of wedded bliss. Weddings. One of my favorite events to attend, to read about, dream about, and pin about. But a wedding, while the most important day of many people’s lives, is really only one day. Documentary filmaker and seasoned wedding videographer, Doug Block, has gone back in “112 Weddings” – an HBO film – to many of the couples whose weddings he has personally captured on film and asks them how have things turned out since they said “I do.
I never imagined how revealing and poignant “112 Weddings” would be. Doug Block uses a very subtle filming style that without great swooping scenes and a dramatic score allows the couples and the truth of marriage to take center stage. Weddings are occasions ripe with emotion – they often draw out the best or worse of peoples personalities. As Rabbi Jonathan Blake puts it cleverly “You throw large amounts of money and alcohol at a wedding, of course you have a good time. You do the same thing to a marriage and it often has the opposite effect.”
Still, despite the often flippant “giant party” treatment that weddings are given, without saying anything – or should I say, without outrageous shows of drama – Doug captures the raw importance of a marriage and it’s immeasurable effects on two people, two families, and ultimately a society.
Block touches the reality of married life. It’s the revealing honesty, not just from the couples (as that honesty can often be found in their reluctance to be open and honest) but also from the filmmaker himself, that shows that beneath the conflict there is still this raw human need for the companionship and love that can only be found within a marriage.
As marriage affects everyone, I highly recommend “112 Weddings” for all viewers!
Here’s the trailer.