This post is in partnership with U Star Novels. Please note that, as always, any personal opinions reflected in this post are my own. 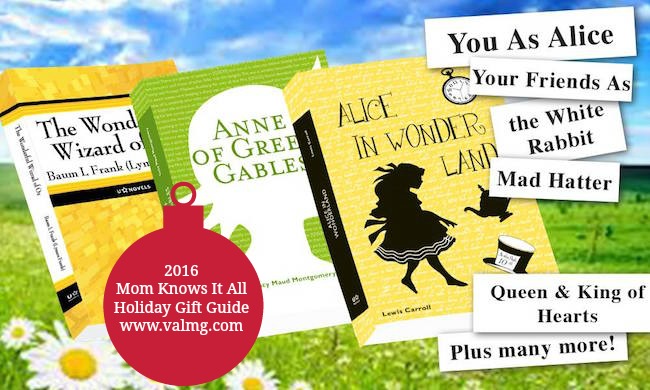 PRICE: starting at $23.95 depending on the book chosen

Reading is a great way to escape daily life for a bit. One of my favorite things to to is just get lost in a book. I have loved to read ever since I was a very young child. I remember reading some of the classics like it was yesterday. U Star Novels has a great slection of personalized books and novels. Spanning many categories including classics, kids, romance and more, U Star is a fun way to get or keep a child interested in reading. Their books place you (or whomever you choose) as a character in the novels. How fun! I giggled imagining some of my family members as characters in one of my favorite stories of all time – Alice in Wonderland. I’ve included how this particular classic is customized below. 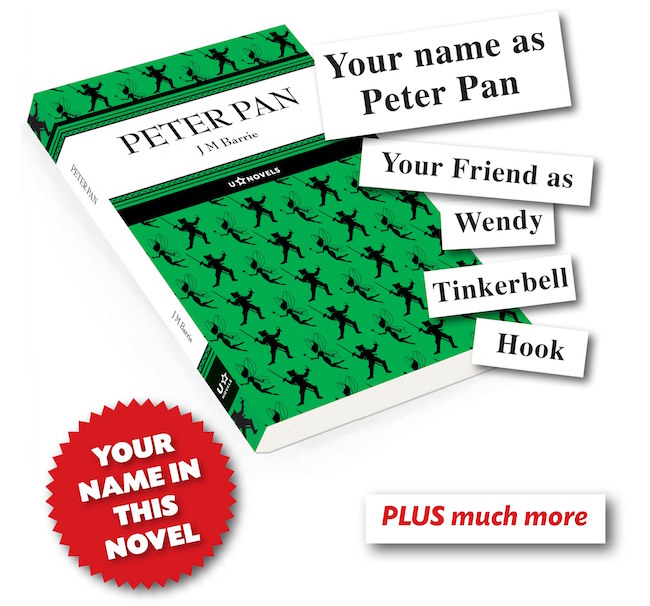 Here’s your chance to follow the White Rabbit down the rabbit hole and find yourself in Wonderland, as you star as Alice in the beloved childhood classic, Alice’s Adventures in Wonderland. Create a one-of-a-kind gift or bring out the child in you as you star in this tale of imaginative nonsense and trickery. Filled with curious characters that can be personalised as well, this is a dazzling frolic for young and old alike, as vivid as only the best of dreams can be.

A lazy afternoon by the water melts away into a wild adventure when young Alice chases a mysterious White Rabbit straight into Wonderland. She comes upon a great hallway lined with doors. There is a small door through which she can see a beautiful garden, but begins to cry when she realises she cannot fit through the door. She finds a bottle marked “DRINK ME” which shrinks her down to the right size to enter the door.

From here, Alice goes on a wonderful adventure coming across ever more curious creatures. She comes across the house of the Duchess, who is nursing a squealing baby, as well as a grinning Cheshire Cat. The Cheshire Cat explains to Alice that everyone in Wonderland is mad, including Alice herself.

After travelling to the March Hare’s house to have tea with the March Hare, the Mad Hatter and the Dormouse, she journeys through the forest to join the Queen in a strange game of croquet. The croquet ground is hilly, the mallets and balls are live flamingos and hedgehogs, and the Queen tears about, frantically calling for the other player’s executions.

Whilst sharing her strange experiences with the Mock Turtle and the Gryphon, she learns that a trial is about to begin. The Knave of Hearts is standing trial for stealing the Queen’s tarts. The Mad Hatter and the Cook both give their testimony, but none of it makes any sense. Next Alice is called to the witness stand… All of a sudden, Alice finds herself awake on her sister’s lap, back at the riverbank.

Alice is the seven-year-old protagonist of the story. She’s often seen daydreaming and gives herself advice instead of listening to the advice of others. The closest thing Alice has as a friend is Dinah, her cat, and not even she understands Alice’s dreams of finding “a world of her own”. Alice is well mannered, polite, courteous, mature and has an elegance and gentleness of a young woman, although once she falls into Wonderland she finds it harder and harder to maintain her composure. She is shown to be determined, but her determination is often overpowered by her temper.

Alice believes that the world is orderly and stable, and she has an insatiable curiosity about her surroundings. Wonderland challenges and frustrates her perceptions of the world.
NB. ‘Alice’ will be replaced with the name of the person you choose to star as Alice throughout the novel, including the cover and novel header as well.

The White Rabbit appears at the very beginning of the book, in chapter one, wearing a waistcoat, and muttering “Oh dear! Oh dear! I shall be too late!” Alice follows him down the rabbit hole into Wonderland. Alice encounters him again when he mistakes her for his housemaid Mary Ann and she becomes trapped in his house after growing too large. The Rabbit shows up again in the last few chapters, as a herald-like servant of the King and Queen of Hearts. Always in a rush, he acts as an unintentional guide for Alice on her adventures and he appears throughout.
NB. The white rabbit can be played by a female or male character. It will appear in the text as [name] the White Rabbit. If you choose not to personalise this character it will not appear as White Rabbit the White Rabbit as our software will correct this.

The Queen is referred to as a card from a pack of playing cards by Alice, yet she is able to talk and is the ruler of Wonderland in the story, alongside the Kings of Hearts. Her most famous line, one which she repeats often, is “Off with their heads!” As well as ordering executions, the Queen enjoys a game of croquet – Wonderland-style! She appears frequently towards the middle and end of the book.
NB. The name of the person you choose to play the Queen will appear in the text as [name] the Queen. If you choose not to personalise this character it will not appear as Queen the Queen as our software will correct this.

The King rules alongside the Queen, but is the moderate part of the Wonderland government. For example, when the Queen, who enjoys ordering beheadings, attempts to have Alice executed (charged with being unable to answer who is lying down in front of her) the King of Hearts reminds her that she is only a child. The King also quietly pardons many of the subjects the Queen has ordered to be beheaded when the Queen is not looking. This guarantees few people are actually beheaded. The King appears frequently in the second half of the book.
NB. The name of the person you choose to play the King will appear in the text as [name] the King. If you choose not to personalise this character it will not appear as King the King as our software will correct this.

The Mad Hatter lives his life in perpetual tea-time! He explains to Alice that he and the March Hare are always having tea because, when he tried to sing for the Queen of Hearts at a celebration of hers, she sentenced him to death for “murdering the time,” but escaped decapitation. Out of anger at this attempted “murder”, time has halted for himself and the March Hare. He hosts a tea party when Alice arrives which eventually drives her away due to his bad manners and unanswered riddles.
NB. The Mad Hatter is a male character. Your personalised name will appear in the text as [name] the Mad Hatter. If you choose not to personalise this character it will not appear as Mad Hatter the Mad Hatter as our software will correct this.

Alice first encounters the Cheshire Cat at the Duchess’s house in her kitchen, and then later outside on the branches of a tree, where it can appear and disappear at will. The Cheshire Cat is courteous and helpful, and often raises philosophical points that annoy or baffle Alice. But the cat does cheer her up when it appears suddenly at the Queen of Hearts’ croquet field, and when sentenced to death baffles everyone by having made its head appear without its body.
NB. The Cheshire Cat can be played by a female or male character. It will appear in the text as [name] the Cheshire Cat. If you choose not to personalise this character it will not appear as Cheshire Cat the Cheshire Cat as our software will correct this. 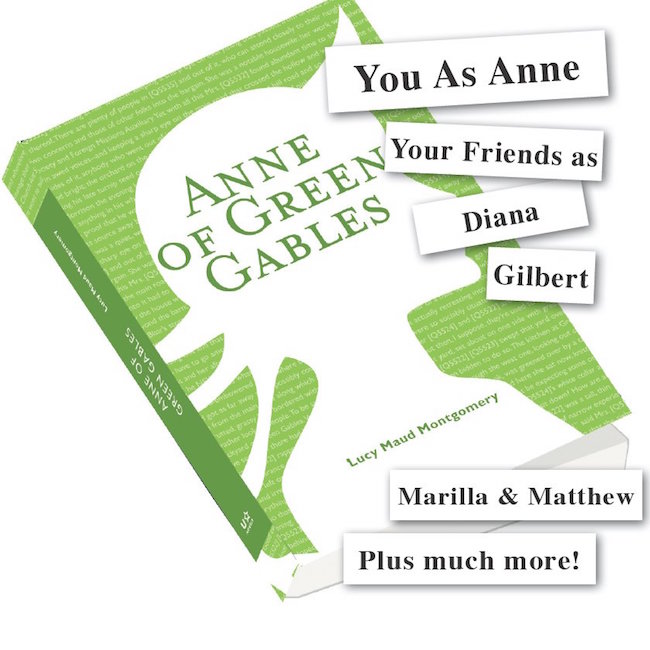 Alice in Wonderland is just one of more than 30 novels you can personalize. Other titles include A Christmas Carol, Adventures of Huckleberry Finn, Peter Pan, The Three Musketeers, The Wind in the Willows, Wizard of Oz, amongst many, many others. A U Star Novel would make a great gift for anyone this holiday season, and would be a gift to be treasured through the years..

Which U Star Novel do you think your loved one would enjoy?

What a cute idea! I have always loved personalized books and I love that you can do this with a classic book!

Oh I love this idea! My kids would love to read their name as their favorite book character. What a unique gift idea!

What an awesome idea! My kids would love this. Actually, I know a lot of kids I could do this for at Christmas time.