Disney The Nutcracker and the Four Realms On Blu-ray

Disney’s “The Nutcracker and the Four Realms” is a coming-of-age tale inspired by E.T.A. Hoffmann’s classic tale and the beloved ballet “The Nutcracker”. 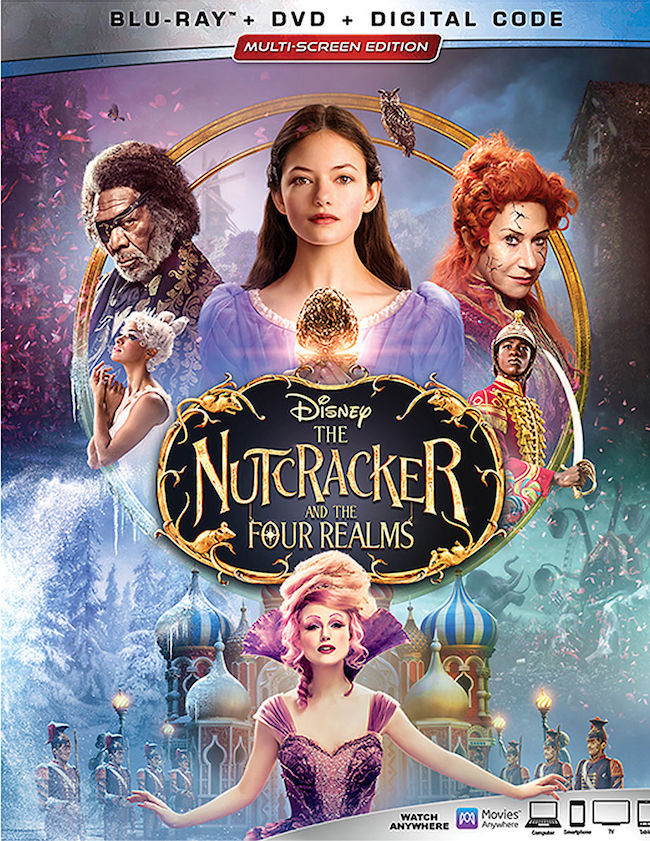 Disney’s The Nutcracker and the Four Realms

My Mom always had a thing for nutcrackers and would get them out every Christmas. I went into watching The Nutcracker and the Four Realms expecting to see a movie highlighting nutcrackers, ballet and Christmas. This was not that. Disney reimagined the story and gave it fantastic scenery, visuals and costumes. The story itself is  big dark, in my opinion more for older teens and adults. There is a good message tucked into the movie, a message that encourages one to believe in themselves and carry on.

Disney’s “The Nutcracker and the Four Realms” is a coming-of-age tale inspired by E.T.A. Hoffmann’s classic tale and the beloved ballet “The Nutcracker”.

In “The Nutcracker and the Four Realms,” Clara travels along a golden thread, presented at Drosselmeyer’s (Morgan Freeman) annual party, eagerly searching for a one-of-a-kind key that will unlock a music box that holds a priceless gift. When she enters a mysterious parallel world, Clara encounters a Nutcracker soldier named Phillip (Jayden Fowora-Knight), a gang of mice and three Realm regents, including the Sugar Plum Fairy (Keira Knightley). Ultimately, she must brave the ominous Fourth Realm, home to the tyrant Mother Ginger (Helen Mirren), to retrieve the key and return harmony to the unstable world.

Filmed in England at Pinewood Studios and various locations in and around London, “The Nutcracker and the Four Realms” is directed by Lasse Hallström and Joe Johnston. Suggested by the short story “The Nutcracker and the Mouse King” written by E.T.A. Hoffmann, and “The “Nutcracker” ballet written by Marius Petipa, the screen story and screenplay are by Ashleigh Powell. The film is produced by Mark Gordon and Larry Franco, and executive produced by Sara Smith and Lindy Goldstein. Linus Sandgren, F.S.F., is the director of photography, Guy Hendrix Dyas serves as production designer and Stuart Levy, ACE, is the film editor. Jenny Beavan and Jenny Shircore are the costume designer and makeup and hair designer, respectively. Max Wood and Marc Weigert are the visual effects supervisor and visual effects producer, respectively. Music is by James Howard with a score conducted by Gustavo Dudamel, featuring piano soloist Lang Lang.