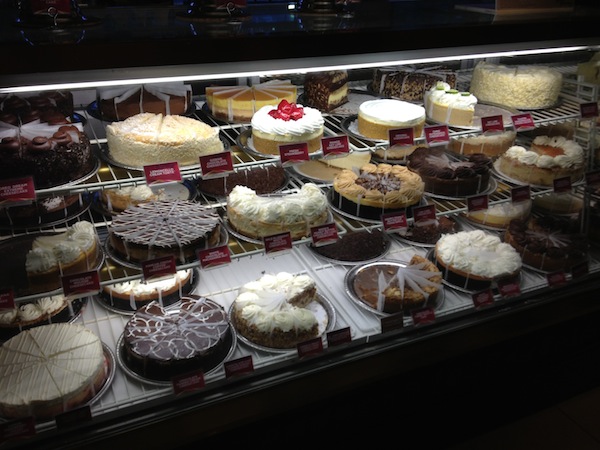 While in Boston last month Debi of The Springmount 6 Pack and I found ourselves hungry and looking for dinner. Parking in the city is not easy or cheap. I had paid for parking at my hotel so we decided to eat near there. Debi had never been to a Cheesecake Factory. I’d only been once and cannot pass up the opportunity to have cheesecake, so that’s where we decided to eat. Of course the first thing you see when you walk in the door is the display case full of different cheesecakes. Holy yum!

The restaurant was pretty busy so we had like a fifteen minute wait, a chunk of which was spent drooling over the cheesecakes. For those that might be interested, the  Cheesecake Factory website states that they offer “50 legendary cheesecakes and specialty desserts.” I didn’t count how many were in the two cases but Debi and I did discuss many of them so I can tell you that there were a lot.

Finally we were taken to our seats. The server brought us our beverages, gave us menus and then left to attend to other customers while we figured out what we wanted. He popped back a short while later but we weren’t ready. He came back again and we still weren’t ready. This happened three times I think, and each time he was just as gracious as the time before. I am a bit embarrassed to say it took us an hour to order. Debi and I were enjoying each others conversation so much that we never noticed how much time had passed. I mention this because the place was busy. Not jam packed, but busy. The server was never impatient or rude, he assured us there was no hurry. Finally we realized we needed to order. 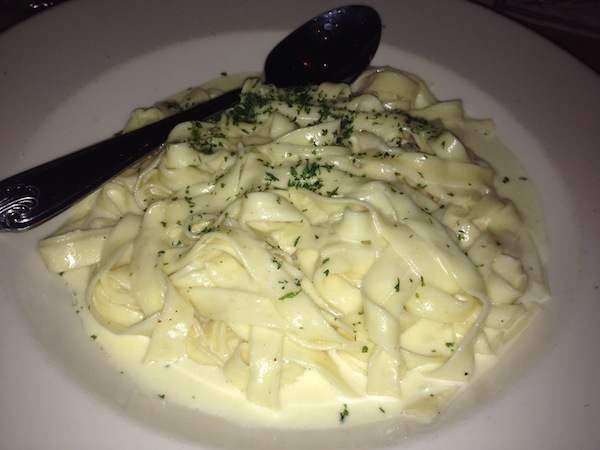 I ordered the fettuccine alfredo. The pasta was just right, not too mushy and not too firm. Alfredo sauce is one of my favorites and this rich and creamy sauce one did not disappoint.

For dessert I had a piece of their 30th Anniversary Chocolate Cake Cheesecake. This cheesecake had layers of their original cheesecake, along with fudge cake and chocolate truffle cream. The combination of flavors and textures was heavenly. It was perfect with a cup of coffee. Warning, it is very rich, but so so yummy! 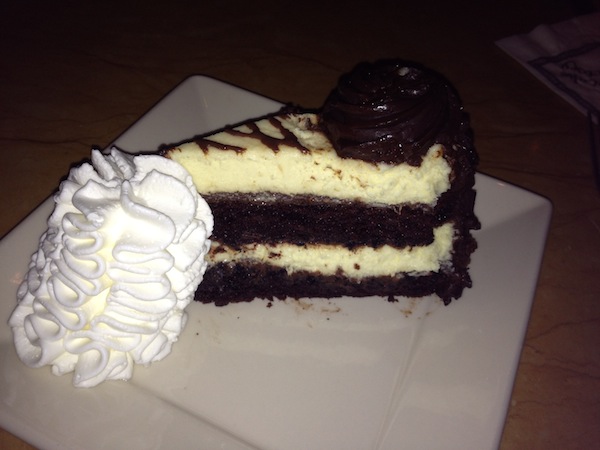 I enjoyed the atmosphere of the Cheesecake Factory in Boston. The menu had a good selection with something for everyone. Portions were more then reasonable. The service we received was outstanding. I’d eat there again if I were in the area.

What’s your favorite kind of cheesecake?

I ate in a Cheesecake Factory exactly once. Unfortunately my Mom was there with us–I think I had pancakes-which I did like-then came dessert–she ordered over us –ONE piece of cheesecake for the 3 of us—-it was delicious but SHE decided that one piece was more then enough for the 3 of us–I disagreed but did not win that arguement. I believe we had cheesecake (NY style) with strawberries. I haven’t been back since-but I want to-WITHOUT my MOM!!!

Oh my gosh, that looks so good! It has been years since I have had good fettuccine. As for cheesecake, I don’t know what my favorite would be as all that I have ever had was New York. I would love to try to find out which one I would love best!

I have been to Cheesecake Factories a couple of times==good food, great cheesecake==my favorite of course original with cherry topping.