written by Valerie, Mom Knows It All
8 comments
FacebookTwitterPinterestEmail

Some of the posts on this site may contain an affiliate link, which means I may get paid a commission if you purchase the product or service. 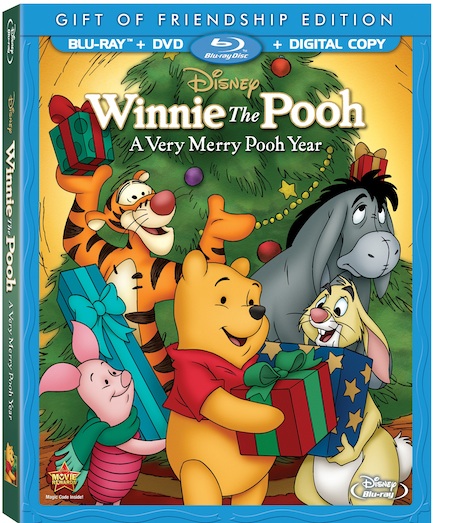 It’s the most wonderful time of the year, but Rabbit will only discover the true spirit of the season after his pals make misguided New Year’s resolutions to change – with hilarious and heartfelt results! Featuring beloved characters, delightful songs and fun-filled bonus goodies, this special “Gift of Friendship Edition” is sure to become a shared family tradition for generations to come!

I love Pooh! A Very Merry Pooh Year is actually a combination of two older, classic holiday episodes. As this begins, Pooh and his friends are remembering a Christmas from their past. Each of the gang had made a list intended for “Sandy Claus” that contained the gift they wanted. Only after the list is blown away is it realized that what Pooh wanted accidentally didn’t make the list. Concerned about his friends being disappointed at Christmas, Pooh, with the help of Piglet, dresses up as Santa and delivers the gifts. Everyone, including Pooh, winds up with exactly what they wanted, proving the magic of the season and the love of friends. In the second part, Pooh and his friends are remembering one year that they all realized what things annoyed them about each other, and made New Years resolutions to change. Can you imagine Rabbit’s personality in one of the other characters? You’ll have to watch to see it for yourself!

This Blu-Ray is perfect for all Pooh lovers, both young and old. It’s a must have for any Pooh collection, and definitely a holiday hit for 2013.

Aww, this looks so cute! I miss seeing Pooh Bear, doesn’t seem like you see it on TV much any more. This is a nice addition to a holiday collection 🙂

my sisterinlaw is obsessed with Winnie the pooh! She would love this DVD for Christmas.

I’ve seen a lot of Christmas specials over the years but not this one. I must check it out! I love Pooh!

We haven’t seen this one! I’ll have to look for it. Sounds really cute for the holidays.

My kids really loved all the holiday themed dvd’s of their favorite cartoons. For years my oldest was obsessed with Winnie the Pooh. For me, it didn’t get old like all the new cartoons probably because I like Winnie when I was a kid and brings back good memories for me.

Love Pooh–so much of him in so many.

I love Winnie The Pooh, will have to get this for my daughter.

i love winnie the pooh