Recently we had quite a memorable day at the Special Olympics Area Track & Field Competition. My little love brought home four medals that day but I’m more taken by how much heart he showed. Let me share what happened.

My son’s first event of the day was the 50m run. I was nearby when his heat ran and he literally looked like he was flying. He loves to run and it was great to see his smiling face on the track as well as on the podium when he was presented with the gold medal. 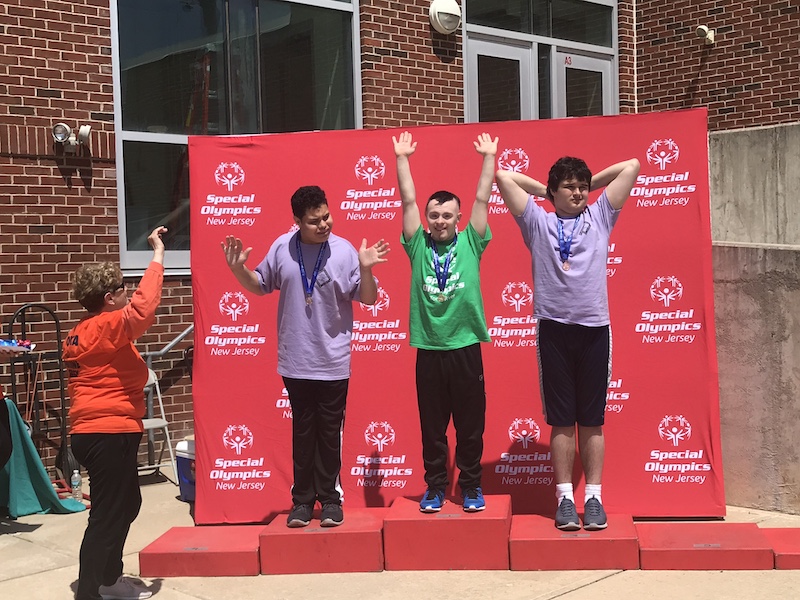 He also participated in the standing jump event. My youngest is small. He tried his best, as is usually the case. Even though some of his competitors were noticeably taller he managed to win another gold medal! 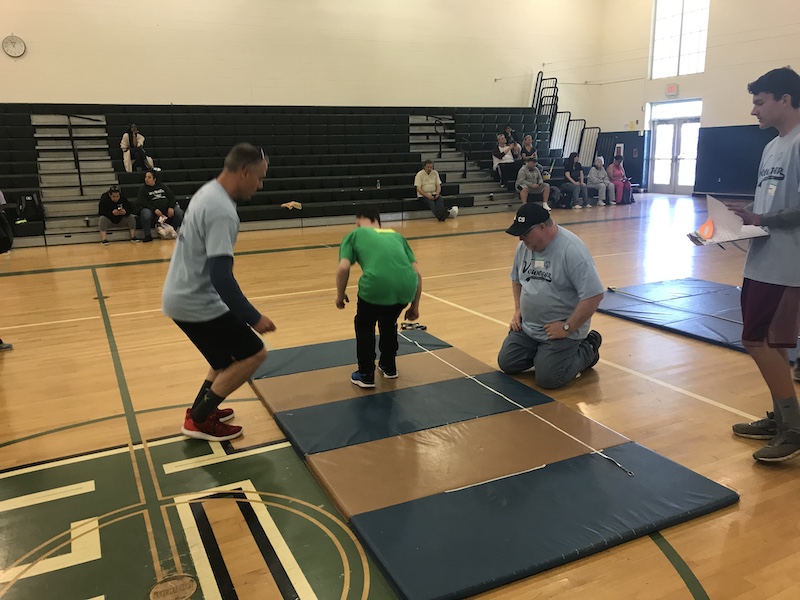 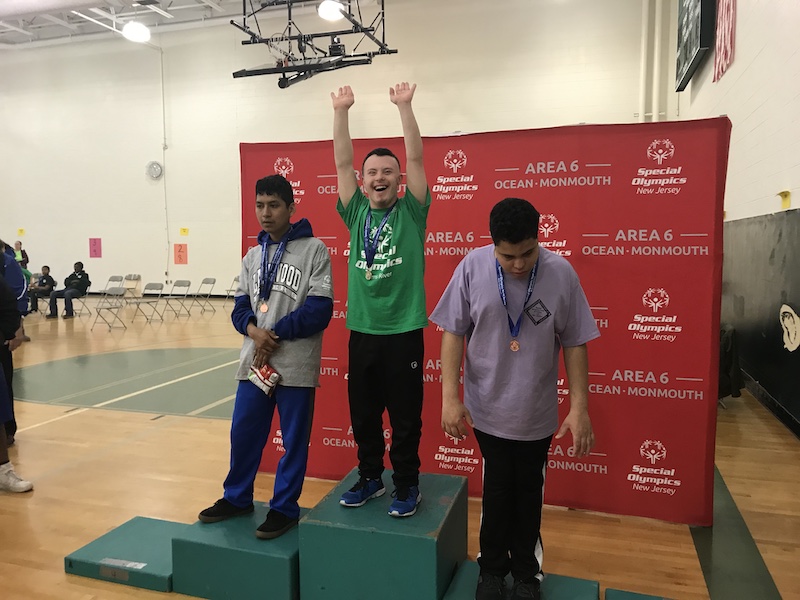 My son’s third scheduled event of the day was the softball throw. He tried his best and won the silver medal. While we were on the softball throw field we ran into one of our first respite providers, someone who has become a trusted friend. My son loves it when we see him so that was a great surprise. In moving from one event to another we ran into one of my son’s coaches. She was delighted to hear how much fun he was having and how well he was doing. She said that she hadn’t fully realized how much he loved running and that if he’d enjoy it she’d run him more next year. She also mentioned that another team was down a relay runner and that my son could fill in if interested. He happily accepted the opportunity to run some more.

Which is how we got to the 400m relay. He had never done one in competition and had only done one or two in practice over the years. 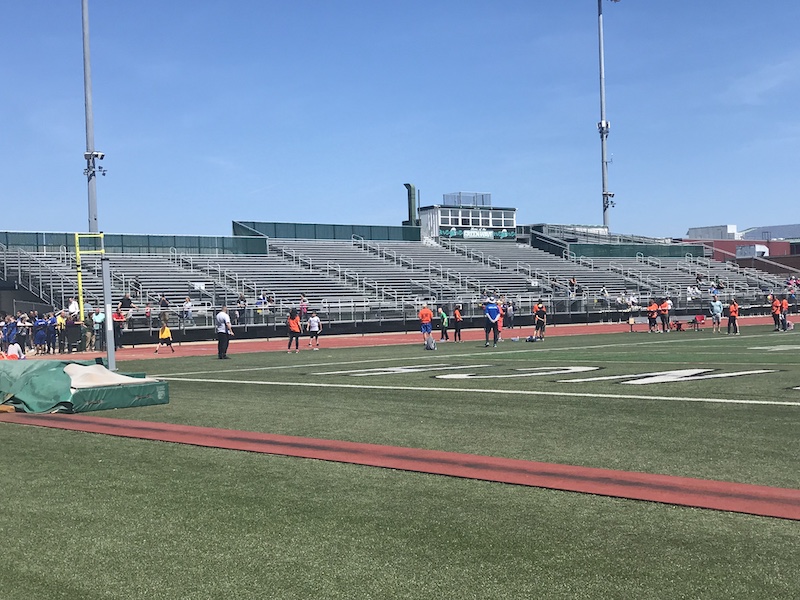 He was running in the first leg of the relay. I stood in the infield near where his leg of the relay  of the  would end. He got a good start and got out in front. Once he made it to the point where his leg of the race was finished, he didn’t stop. Instead of slowing to pass the baton and stopping, he kept running. He either didn’t remember or didn’t realize. Confusion was setting in. The athlete that was supposed to run the second leg took off after him.

My love finished the second leg, still out in front. And he kept going.  He was doing really well then tired suddenly as he reached the point where the fourth leg was to start.

It was about that point when my son realized what he’d done and that it hadn’t been what he was supposed to do for the team. He just broke down sobbing, sitting on the edge of the track. As I started making my way over to him people throughout the bleachers started cheering for him. He was so disappointed in himself that it was truly heartbreaking to see. After a couple of minutes he calmed down enough to stand. He was asked to go over to the awards area where he was presented with a silver medal along with the rest of the team. The team that he’d been running for, both coaches and athletes, were great sports. 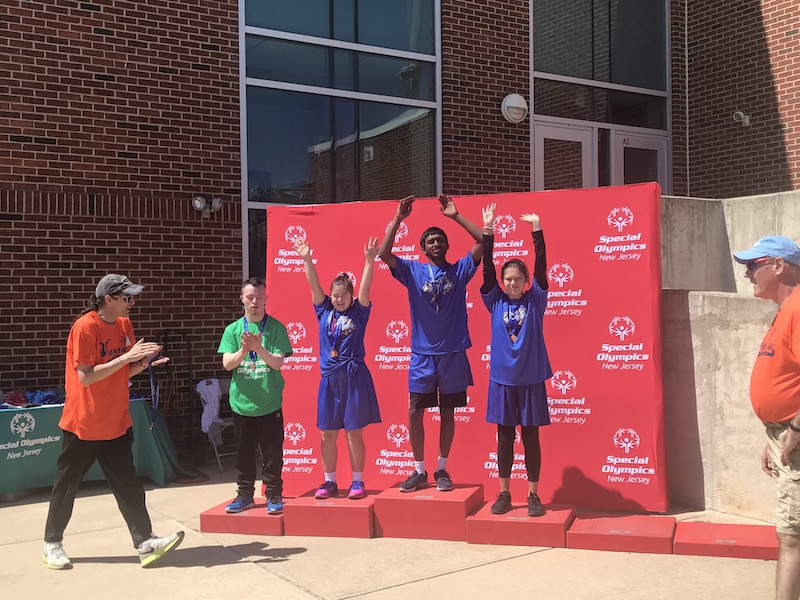 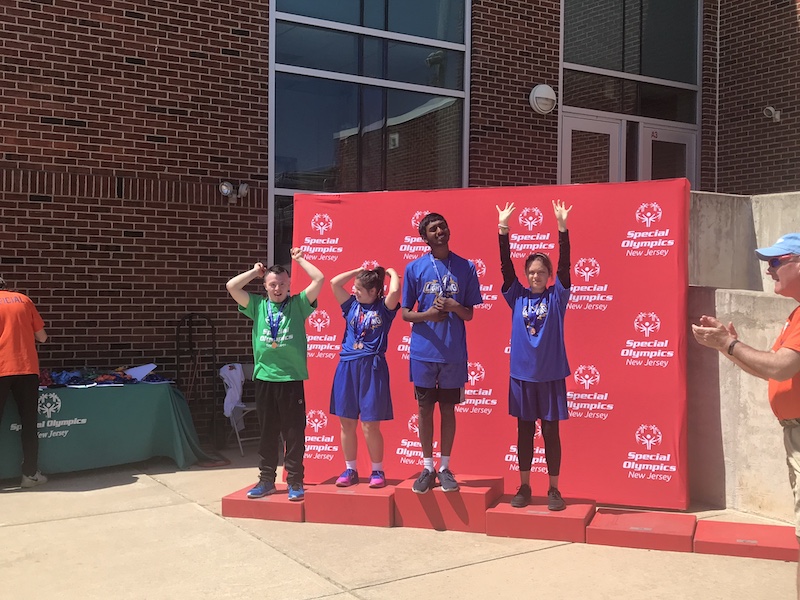 The day came to a close and we headed home, my son sporting his four medals. The track and field season is over, only the team party remains. His pride was wounded but has healed. I know my son loves to have fun. He enjoys running and is competitive. I’m going to encourage him to continue to do his best, as he always does. And I’m going to continue to be so grateful that I have an incredible son with so much heart. This is so awesome and heart-warming! I love watching the Special Olympics. Your son did an amazing job!

Your son is such a ray of light in this dark world. The joy that emanates from him is so pure and radiant. Congrats to him for winning his medals.

I love the Special Olympics. I think it does such an important job of teaching the kids how to be confident and learn life lessons. Your son did a great job.

I love this!!!! He looks so happy and like he had a ton of fun- which is exactly the purpose!!

This event looks so fun. I love running so I would enjoy watching the kids compete.

This is wonderful! I have a friend who’s daughter is in the Special Olympics for swimming. What a great way for kids with special needs to be able to compete and have fun!

This is a special event. I am so glad that everyone enjoyed it!

This is such a good milestone to everybody in the event. It is very touching and inspirational actually. He really is a champion.

What a wonderful day. Thanks for sharing this beautiful story.

This post makes my heart smile. My brother is autistic and when he was in school he always participated in the special Olympics. Congrats to these amazing athletes!