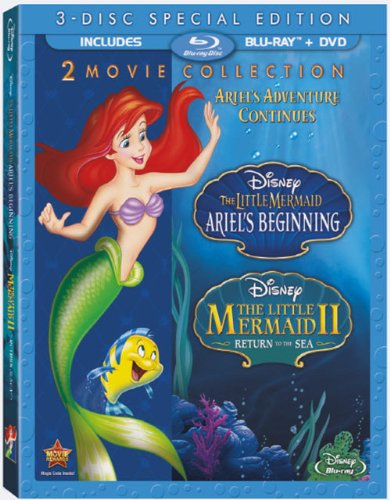 The Little Mermaid II: Return to the Sea
All of your favorite characters from The Little Mermaid continue their adventures in this enchanting sequel to one of the most celebrated animated films of all time. Even though her parents tell her merpeople and Atlantica are just “old fish tales,” Ariel’s daughter, Melody, dreams of being part of that magical world. In an unforgettable story that will take your breath away, all the good creatures on the land and under the sea must join forces to show Melody that both her worlds can live in perfect harmony.

The Little Mermaid: Ariel’s Beginning
One of Disney’s most beloved characters reveals the extraordinary events that led up to her transformation into a princess! Long before Ariel walked on land and into Prince Eric’s heart, she was one of seven beloved daughters of powerful King Triton. But times were troubled in the underwater kingdom – and music was banned! In this magical adventure, Ariel, her fun-loving sisters, and her loyal friends Sebastian and Flounder strive to bring music and friendship back to Atlantica. Featuring breathtaking animation – and some thrilling surprises – The Little Mermaid: Ariel’s Beginning is an enchanting tale you’ll share with your family again and again!

The Little Mermaid II: Return To The Sea

The Little Mermaid is one of my favorite Disney movies. I’ve seen it many, many times. If you’ve ever wanted to know more about the background of the underwater mermaid kingdom, The Little Mermaid: Ariel’s Beginning will help explain that. The movie is a prequel to The Little Mermaid, and it explains about Ariel’s childhood, including what happened to her mother and why music was banned.

Here’s a clip where Ariel’s sisters all question her on her whereabouts the night before, when she’d been out past curfew.

It’s the story of Ariel’s daughter, Melody. Ariel and Prince Eric are enjoying life on land and have started a family. When Ursula’s sister Morgana interferes and tries to harm Melody, Ariel makes sure that her daughter will be safe by making it so Melody doesn’t know about her mermaid heritage. As Melody grows older she dreams of being part of the magical world of Atlantica in the same way that Ariel used to want to be a part of the human world that lived on land. She sneaks out for a swim one day and this provides Morgana with the opportunity to take advantage of the situation to try and get to King Triton once more.

And here’s a clip from the film where Morgana turns Melody into a mermaid.