We love games here, and Monopoly is one of our favorites. I was excited to be offered the opportunity to check out one of Hasbro’s new Cars 2 games – the Monopoly Disney Pixar Cars 2 Edition Board Game. 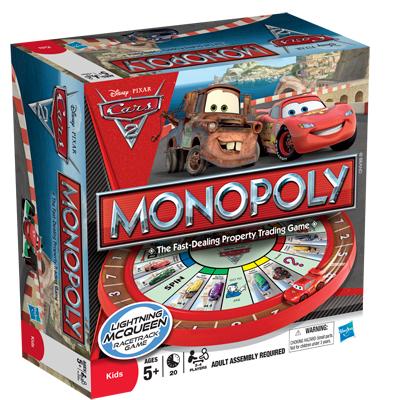 Race to “real estate” victory with characters from the Cars 2 movie! Buy and trade cars in this fast-paced game to try to earn the most money. Speed your way around the board, build up monopolies and—if you’re the richest player at the end of the game—win! 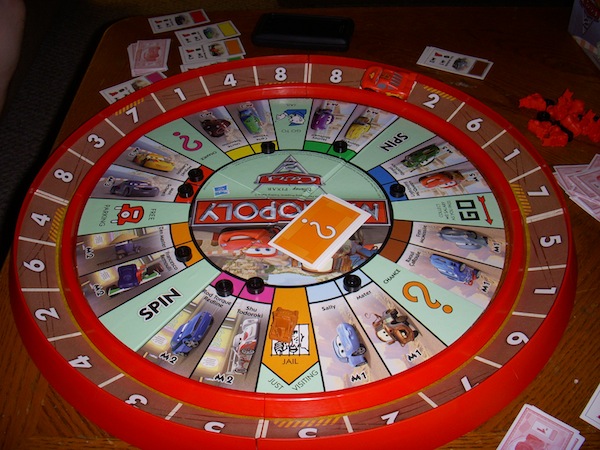 I received the Monopoly Disney Pixar Cars 2 Edition Board Game. The game comes with 1 racetrack (in 4 pieces), 1 Lightning McQueen racecar, 1 gameboard, 16 Cars cards, 16 tires, 8 Pitties, 4 character movers, 16 Chance chards, money pack and instructions. The game is different than regular Monopoly, gameplay is definitely meant to involve younger children. The box says the game is intended for 2 to 4 players, ages 5 and up. Gameplay is easy. Each player selects a token. Instead of rolling dice to determine how many spaces to move, the player pushes a large Lightning McQueen car around the track, whose spaces are randomly numbered. The rules state that you must buy a property if you land on it. Rent is paid if a property is owned, as in regular Monopoly. To earn money you either must circle the track ($2) or collect rent. There is no free parking or railroads, and no double payment if you land on go –  in other words, no ways to earn extra cash. The game ends when either you can’t by a property or can’t pay  a rent – neither of which might take very long considering the game only comes with $70. The game would be a good choice for families with younger children learning early counting skills.

Monopoly Disney Pixar Cars 2 Edition Board Game is available online and in stores and retails for $19.99. Hasbro’s other new Cars 2 games include Operation and Sorry! Sliders.

Food For Thought – Pounds Versus Items At The Deli

Tried playing Sorry with NV–maybe this would have been easier.

Your directions make no sense. What do you do with the red card and the tires?