I can’t believe Thanksgiving is tomorrow. I don’t know where the year has gone. Thanksgiving has always been a holiday that I enjoyed. One of my Mom’s favorite things to watch is the Macy’s Thanksgiving Day Parade. I clearly remember watching the parade every year when I was a child. We all thought it was sort of magical. 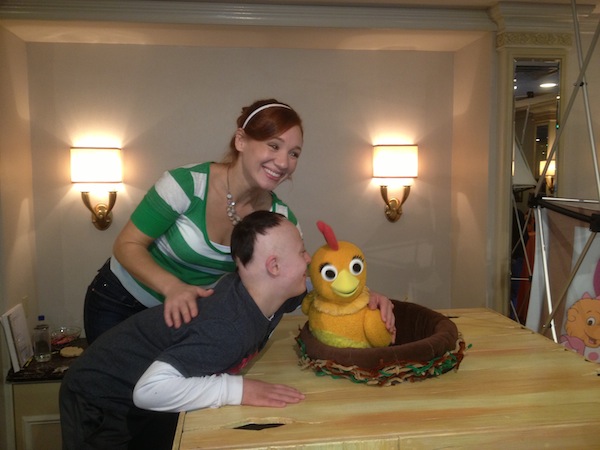 Five years ago today I witnessed a different kind of magic. Five years ago today I was fortunate enough to be able to take my Mom and my youngest into New York City to watch the Macy’s Thanksgiving Day Parade as guests of the Sprout Channel. Watching my Mom’s smiling face in the window next to me observing the floats go by was a delight. Seeing my son’s reaction to meeting Sprout’s Chica was pure magic that brought tears to my eyes and made my heart smile as big as it ever has. It was a great day. If you enjoy parades and celebrations, the Macy’s Thanksgiving Day parade is definitely something you should check out. There’s no denying the fact that the Macy’s Thanksgiving Day Parade is iconic. People here on the East Coast battle traffic, lines and crazy early hours in order to go into the city to watch it in person. Those that can’t or don’t care to venture into the city watch the parade on television, along with the rest of the country. An estimated 3.5 million spectators in NYC and greater than 50 million television viewers nationwide see the Macy’s Parade each year, marking the official start of the holiday season. In 2017, for the third consecutive year, the iconic Ram is the Official Truck of the Macy’s Thanksgiving Day.

There are 26 floats in the 2017 Macy’s Thanksgiving Day Parade; all towed by a Ram truck (1500s, 2500s and 3500s). This year, five new floats will debut in the parade. Macy’s Parade floats – true works of art and engineering marvels – are designed and created by the incredible artists of Macy’s Parade Studio which include carpenters, painters, animators, sculptors, metal fabricators, scenic/costume designers and electricians. For 91 years, the Macy’s Thanksgiving Day Parade has marked the official start of the holiday season. Growing in size and scale, the Parade proudly marches down a more than 2-mile route in New York City with more than 8,000 participants in tow including Macy’s (NYSE:M) employees, their families, celebrities, athletes, clowns and dance groups spreading holiday cheer. The Parade also features America’s best marching bands, fabulous floats and Macy’s signature giant helium character balloons.

Macy’s Parade floats are often three stories tall and several lanes of traffic wide, but most collapse to no more than 12 ½ feet tall and 8 feet wide in order to travel safely from the New Jersey home of the Parade Studio to the Manhattan starting line via the Lincoln Tunnel each Thanksgiving eve. Ram trucks tow the floats from NJ to NYC overnight Wednesday. In total, Ram will provide the Macy’s Parade with nearly 70 trucks and commercial vans, many of which are used for behind-the-scenes functions leading up to the parade start. Ram trucks not only help transport the larger-than-life floats down the Parade route, they are also utilized to move other parade materials needed to produce the annual spectacle, from tool containers to costumes, and much more, in the lead up to the start of the procession on Thanksgiving day.

Truck customers, from half-ton to commercial, have a demanding range of needs and require their vehicles to provide high levels of capability. Ram trucks are designed to deliver a total package. Since its launch as a stand-alone division in 2009, the Ram Truck brand has steadily emerged as an industry leader with trucks that are proven to last. Creating a distinct identity for Ram trucks has allowed the brand to concentrate on core customers and the features they find valuable. Whether focusing on a family that uses a Ram 1500 day-in and day-out, a hard-working Ram 3500 Heavy Duty owner or a business that depends on its Ram ProMaster commercial van every day for deliveries, Ram has the truck market covered. In order to be the best, it takes a commitment to innovation, capability, efficiency and durability. Ram Truck invests substantially in its products, infusing them with great looks, refined interiors, durable engines and exclusive features that further enhance their capabilities.

“Ram continues to take great pride in aligning our brand with an iconic American event like the Macy’s Thanksgiving Day Parade,” said Mike Manley, Head of Ram Brand, FCA – Global. “Being the official truck of the parade provides an excellent opportunity to showcase the towing capability, style and innovation of our 2018 Ram 1500, 2500 and 3500 trucks.”

The Ram Truck brand continues a custom of its own this year with the #RamGivesThanks video tributes recognizing all Americans sharing a common ground of working hard to make our country strong.

The parade is broadcast live on NBC beginning at 9 a.m. in all time zones.

I love pickup trucks, this Ram looks amazing, and quite honestly is PERFECT for pulling the floats! I love watching the Macy’s Thanksgiving day parade, it’s so nice to wake up to.

Wow! I used to be right around there when they started putting the balloons together. I kind of miss that area. It has been a minute since I’ve been over there. Can’t wait to see the spectacle tomorrow. Should be tons of fun.

That Thanksgiving parade has always been magical. Seeing my first as a child on our “new” b&w television was magical. Many years later that parade was just as magical seeing it live. Thanks for the memories. they are what gets each of us through.

I would love to visit the parade one year in person. it is amazing what Ram trucks can do!

When I was younger, I always wanted to see the parade in person. That was one of my goals. I’ve always reflected about that every time it came on and now that I can do it, I might just have to.

What a funl parade! I wish we have parade like this where I lived. Looks like that Ram truck is the steal of the show. Love the color and the design.

I love he thanksgiving day parade! I grew up in nyc but we never went to it in person maybe one day idk about dealing with the crowd and cold lol. As far the the ram truck we LOVE ours! We have a 3500 which pulls our house in wheels and it’s been our favorite truck so far !!!! DOdge does not disappoint!