My surgery date is finally almost here. For anyone that doesn’t know, I’m having surgery on my right foot. I’m actually having three different procedures done at once :

Following surgery I am to be non-weightbearing for 4 weeks. This means no walking and no driving.

Before the big day I had to get preop clearance, which included bloodwork, a chest x-ray and a final clearance from my primary physician. Pretty standard stuff that I’ve had to get before every surgery I’ve ever had. All of it had to be done in a very short and specific window of time before my surgery date.

The tech started with the bloodwork. Everything seemed to be going as per usual. I felt a little more discomfort than usual when she took my blood. Before I could even look at my arm she stuck some gauze on and taped it down. Next up was the EKG. Once that was over she then walked me over to x-ray.

My visit to the radiology department was quick and uneventful. The x-rays were taken right away and I was out of there in about 10 minutes.

From there I went upstairs to the hospital’s physical therapy department. I’d been instructed to go there to pick up a pair of crutches for surgery day, to use when I was discharged. 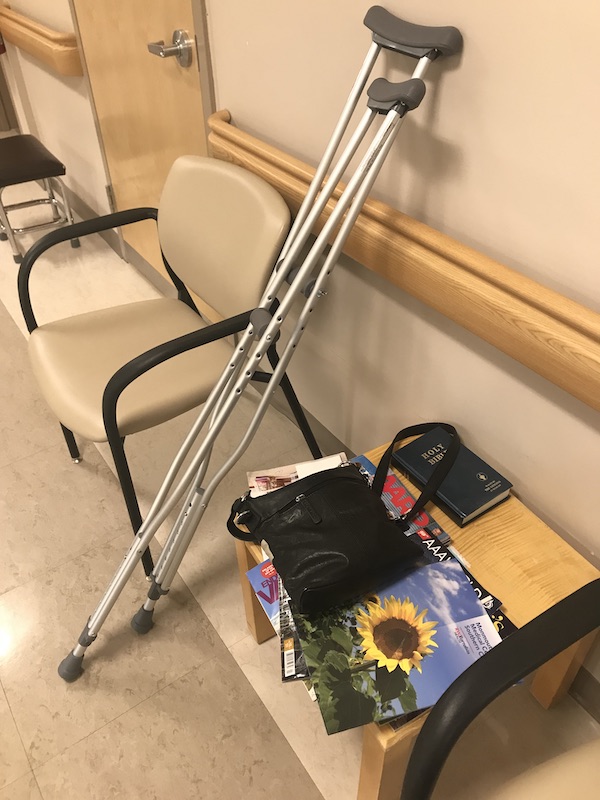 At first I was greeted by a pleasant man. I told him I was having foot surgery in a few days and was there for a pair of crutches. He went and got a pair for me to try. They were super uncomfortable! While he went to do something else I was approached by a nice woman. She asked how I felt about the crutches and I told her they hurt. She checked and said the pair was too tall. She went to get a different pair. Fortunately these weren’t nearly as unpleasant as the first pair.

Next came crutch training.She covered how to use crutches on a flat surface and on a step, as well as how to sit down and get back up with them. I survived it all but was not very good at it. The woman thought I might prefer a walker so she went and got me one of those. Using a walker made me immediately think of my Grandma. She was an amputee and had a walker for many years. It never looked like she had a had time with it, it just looked like she was cautious.The woman showed me how to use the walker. I did a quick pass around the room before sent me on my way with it. Time to head home.

When I finally got home I removed the gauze from where my blood had been taken. I was absolutely shocked to see a giant bruise and bubble. I’d never seen anything like it before so I called my primary physician. The tech in the hospital had blown a vein! 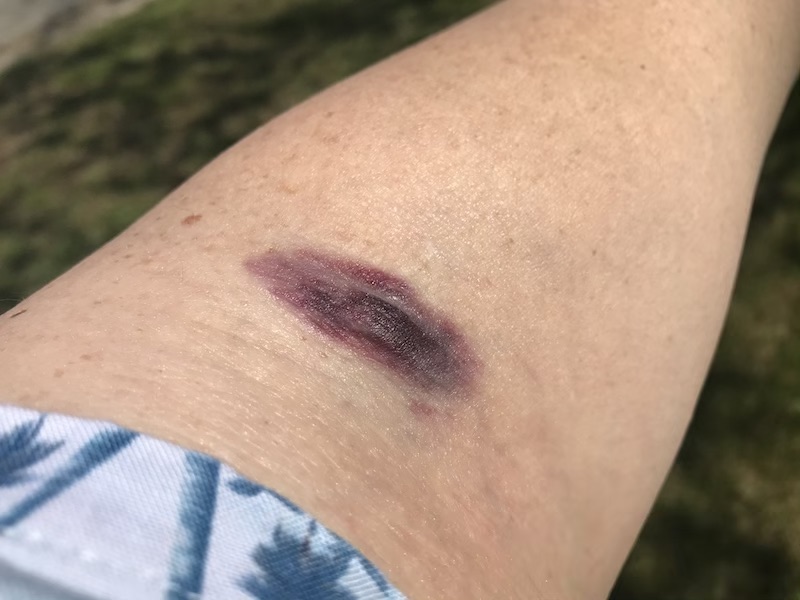 The nurse at my primary doctor’s office told me it shouldn’t be a big issue but if I wanted to come in I could. Instead of going in we agreed I’d give it a day and if it was still bothering me they’d bring me in. The discomfort by today was not as bad so I just left it alone.

I saw my primary physician three days later to go over everything. All of my labwork was in order. The chest x-ray, on the other hand, was not. My primary doctor told me the results of the EKG reflected that the leads had not been connected correctly. He did an EKG right there in the office that showed no problems. I was then cleared for surgery.

Two days before surgery I got a call from a man in the same day surgery department at the hospital to go over the information I needed before surgery such as arrival time and the reminder to not eat after midnight. When he asked to confirm where I’d gotten my pre-op testing done I told them I had had it done right there at the hospital. I figured I should ask if the same staff from pre-op would be in surgery. He asked why I questioned this, so I told him what had happened and that I really didn’t want her in the operating room. He said he understood and that there would be no problem. Let’s hope not.

Advantages Of Having A Terrarium And Creative Terrariums

Wow… what a story! I do hope your surgery goes well and wish you a speedy recovery!

This is a great post for people who may have never had surgery and are wondering what all it involves. Best of luck on your surgery and thanks for sharing this great information.

Oh my goodness, what a procedure to have to go through – on top of the errors and the worry of if certain incompetent staff would be involved in the actual surgery! 4 weeks is a long time to be non-weight bearing, especially if you have heaps to do. Best wishes to you and I hope everything turns out really well.

As a cancer survivor, you learn that you will have good and bad techs, but mostly good ones. I always hated to have to ask for a special tech, but my doc always told to do everything I could to feel safe and comfortable. You did a good thing.

GREAT! I hope the surgery went well, without any particular recap.

Hope that surgery and everything goes well for you! Take care of yourself!

I hope your surgery goes smoothly, and that you have a relaxed and speedy recovery. Wishing you all the very best!

There should always be a good preops before any operations. It’s also good to consult to other doctors to get a second opinion.

Oh wow! I hope you’re surgery goes well! I’ll be thinking about you!

Oh goodness, I hope it goes well and wish you a speedy recovery!!

Get some rest girlie. I’ll keep you in my thoughts and prayers.

i wish you the best. i have had 28 surgeries and have 2 more scheduled this month so i feel you