You’re familiar with Krusteaz, right? They’re the people that make those convenient mixes, for pancakes, waffles, muffins and much more. Well, the folks at Krusteaz sent me a package containing some of their most popular breakfast items, asking me to share what I came up with as a breakfast dinner.

We always have cheese in our house. The hubby has been known to say that I can’t make a dish without cheese. For the record, I can but often don’t. Grilled cheese is a favorite around here, because it’s really easy to make. I thought it would be fun to make a grilled cheese sandwich using waffles. But, I knew I wanted to change up the flavor a bit. So to that end, I added shredded bacon to the Krusteaz Belgian Waffle Mix that I used. Here’s how I made it. 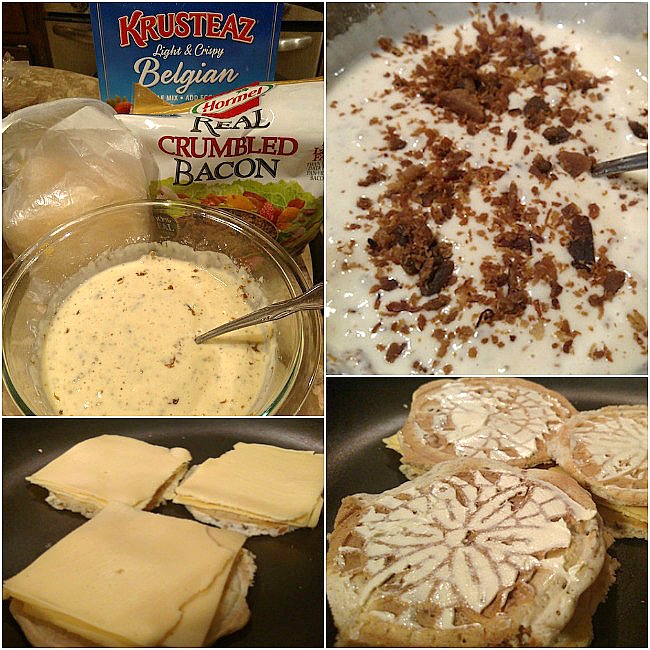 Make the Belgian Waffle mix according to the instructions. I used the lowest quantity to make this meal, which if you were making waffles would be two or three 7″ round waffles according to the box. Once the batter is made, add the bacon in and stir well.

Now it’s time to cook the waffles. It was at this point that I realized I no longer had the little electric waffle maker that I thought I had. So, I had to break out my crepe/pizzelle/pancake maker. Not wanting a flat sandwich, I used the pizzelle plates (think waffles but much thinner) to make my waffles. My pizelle maker makes three small pizzelles at a time, each of which is approximately the circumference of an English muffin or small pancake. I had enough batter to make 12 “pizelle” waffles, which is six sandwiches. I sprayed the plates with a little cooking spray and poured the waffle batter in. I cooked until the machine let me know it was finished cooking, which was 3-4 minutes. When my “pizzelle” waffles were finished cooking, I put them onto a plate.

Next I lightly buttered one side of each “pizzelle” waffle, in the same manner that I butter the bread when making grilled cheese. Then, I placed four slices of American cheese on one waffle and placed another waffle on top of that.

Serve these immediately as soon as they’re done, because they cook really quickly. I did find that I preferred the flavor when I dunked a little bit of the sandwich into a little pancake syrup. This gave the sandwich the moisture I felt it needed since it was on waffles. I am thinking next time I make these I am going to try adding one or two thin slices of ham, partially for flavor and partially to add some moisture for those that prefer not to dip into syrup. 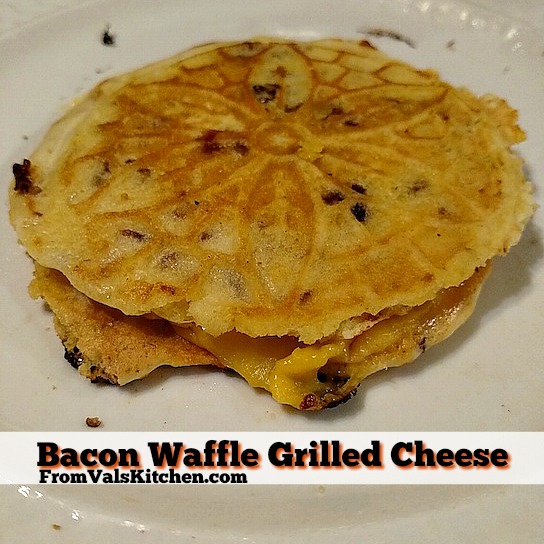 to read more of the facts from the survey, click here. You can also download and print a coupon for $0.50 off any one pancake or waffle mix by clicking here. 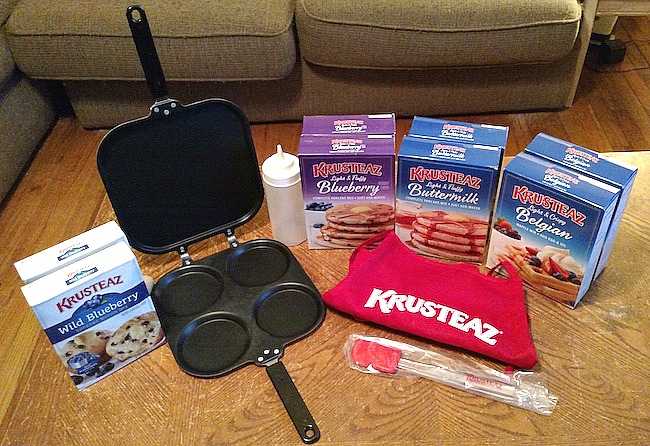 ONE winner will receive a Krusteaz Breakfast Night starter kit including:

Enter using the Giveaway Tools widget below. The winner will be selected by the Giveaway Tools widget. If you’ve entered any of my giveaways before then you know that you must complete the mandatory required entry, and that only comments answering the question asked will be eligible for entry. No PO Boxes. From Val’s Kitchen is not responsible for prize fulfillment or shipment of prizing. Good luck to everyone!

Treat Your Pet To Extra TLC With #BabbleBoxx Pet Edition

My fav would have to be a loaded veggie and ham omelet! Can’t go wrong there!!! 🙂

Waffles with your choice of toppings and mix ins and bacon would be my choice.

Omelettes – work for any meal of the day!

That sounds so good. My mom always made ice cream sandwiches out of waffles when I was a kid.

I love waffles mixed with cheese and bacon. Would love to win this so I can make plenty for the kiddos.

Breakfast night is the best! We do it about once a month, and it’s so much fun.

That looks delicious! We love bacon and waffles!

I love pancakes and bacon any time of the day or night!

This looks so yummy. My favorite breakfast night meal is egss, bacon, biscuits with sausage and gravy.

I love pancakes and eggs! Breakfast for dinner is the best!

My favorite breakfast night meal is waffles and sausage or bacon. I’m not a big egg fan, but the rest of the family appreciates them. Krusteaz is a favorite, and I’m so happy Wal-Mart started carrying it again.

Wow. I want to try this Yummy recipe. This really looks delicious. Waffle and bacon is one of my favorites.

Mine is breakfast burritos but we also love pancakes.

My favorite breakfast night meal is sausage gravy and biscuits.

I like egg and cheese crepes for breakfast night!

My favorite is sourdough french toast.

If we have breakfast for dinner, we usually have bacon and scrambled eggs.

My favorite is egg burritos. There is too much prep and cleanup to eat those in the morning, so we always eat them at night.

We do breakfast for dinner a bunch. I haven’t tried anything like your grilled cheese, but it looks so yummy. Can’t wait to add it to our list of favs like Belgian waffles & omelets.

This looks incredible! We love breakfast for dinner at my house and this would be perfect for that.

What a creative meal idea to combine waffles and grilled cheese! I bet my family would love this

I love any kind of egg dish for dinner. A side of pancakes is always good, too!

Oh we love to do pancakes, sausage, and bacon!!! We do this about once a week!

I love having pancakes and sausage for dinner

Pancakes, biscuits with sausage gravy, bacon, waffles… I love it all!

We do just about anything for brinner but our favorite is pancakes!

That would be a big Country Breakfast which is: Pancakes, Scrambled Eggs, Bacon crispy, Sausage patty, Biscuit & Gravy. Maybe even some tiny potato pancakes. Wow what a meal!

scrambled eggs with bacon or sausage

We are big into fritatas here as well as pancakes

We love waffles and bacon!

I make hashbrowns, bacon, eggs and sometimes pancakes when we have breakfast night.

We love having French toast and bacon for dinner!

We make waffles with just eggs and banana (no flours) and serve with fruit and sausage. Yum!

I like to have a bacon and egg sandwich for dinner

Breakfast burritos are the best for dinner! Yum!

My favorite breakfast night meal are pancakes and sausage.

I love everything bagel grilled cheese sandwiches with bacon and spinach!

What a fancy pancake. Looks great!

I love biscuits and gravy with scrambled eggs and pancakes

I love blueberry pancakes for a breakfast night meal.

We like pancakes with bacon for dinner on breakfast for dinner night.

This breakfast sandwich sounds so wrong but it looks so, so good….I so need to try this!! YUMM!