Dominoes is one of my favorite games. It’s a game that encourages counting, math, memory and strategy. It’s a perfect game for any family game night, or a night with friends. Kingdomino, made by Blue Orange Games, is a fun variation that builds on the basic premise of dominoes but adds in a building aspect. Kingdomino has been winning awards and gaining in popularity, and this year Target has a new exclusive version of the game.

Kingdomino is a family strategy game for 2-4 players ages 8 and up. Play time is approximately 20-40 minutes.

An Instant Family Favorite! Players take on the role of Lords seeking new lands to expand their kingdom. As with ‘Dominoes’, these new lands must match the landscape tiles they touch when played. You need to create large areas of the same landscape type. But these will only score points if they include crowns. Points for each landscape are calculated at the end of the game by multiplying the size of the landscape (number of squares) by the number of crowns they include. The tile selection directs the order of play for the following round, so taking a good tile now could possibly mean you will pick later next time, with less choices. Each round presents the players with new important decisions to make, as to which tile they should take.

The simplicity of the game mechanic makes it very accessible to all levels of gamers, from casual family gamers, all of the way to more avid gamers who appreciate the strategy levels and have been very supportive of the game since its release. The game was designed by Bruno Cathala, a designer whose notoriety has continued to grow as the years pass.

It has been a busy 18 months for Kingdomino, as it is one of the bestselling board games in the U.S., it has also won numerous Game of the Year awards around the globe — such as in Germany, Brazil, Japan, and Italy– and it was voted Best Toys for Kids Award by U.S. independent retailers in 2017.

Spiels des Jahres, which proclaimed Kingdomino the 2017 Spiel de Jahres Winner (Game of the Year), gave a jury statement: “’Kingdomino’ lifts the time-honoured principle of dominoes to a new level – without losing any of the sleek elegance of its predecessor. On the contrary: the dual mechanics of planning the far-reaching lands surrounding the castle and the clever method of selecting tiles fit together extraordinarily well, they are expertly reduced to their essential components. The strong two-player variant with an XXL kingdom rounds off this quick and easy-to-learn gaming experience.” 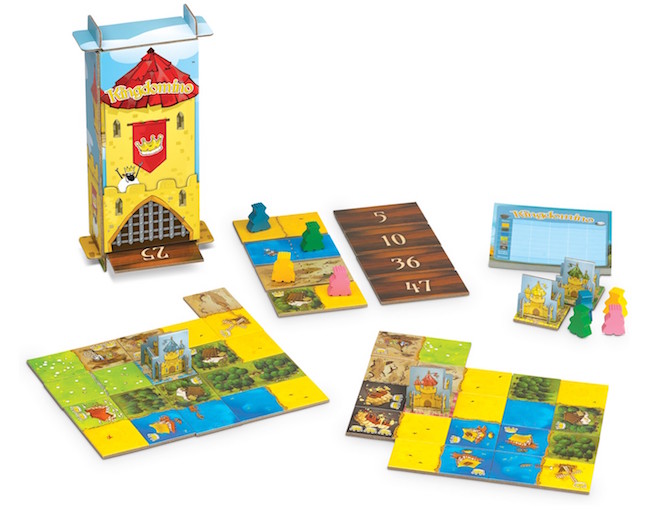 One year after winning the coveted game of the year award, the Spiel Des Jahres, Kingdomino comes to 1,822 Target stores all across the United States. The new Target exclusive version of the game comes in a larger box and includes a Domino Dispenser, which makes pulling the dominoes out easier and much more convenient, and a Score Pad, which makes counting points quicker.

“We are so excited for Kingdomino to be available at Target in the form of an exclusive version. Such a distribution allows us to expand our reach of customers,” said Martin Marechal, the Vice President of Blue Orange Games. “Kingdomino is a great family game, perfect for casual game nights. It already has the winning formula with easy to grasp and very interesting gameplay recognized by the most prestigious board game organizations around the world. With more people experiencing this game, the enjoyment will spread to family members and friends, and it will become a classic in the years to follow.”

The Target exclusive version of Kingdomino with the Domino Dispenser and Score pad can be purchased at www.target.com/kingdomino. Retail pricing is $22.99.

On Becoming Your Own Bartender

Looks like a fun game to play with my family!

I’ve never heard of this – looks like fun for family game night!

This sounds like it would be a great gift idea for my neices and nephews! Thanks for the recommendation!

My kiddo would really like this… I need to look for it on my next Target run.