written by Valerie, Mom Knows It All
27 comments
FacebookTwitterPinterestEmail

The product(s) featured in this post was provided free of cost to me. This post has not been monetarily compensated. Please note that, as always, any personal opinions reflected in this post are my own and have not been influenced in any way. 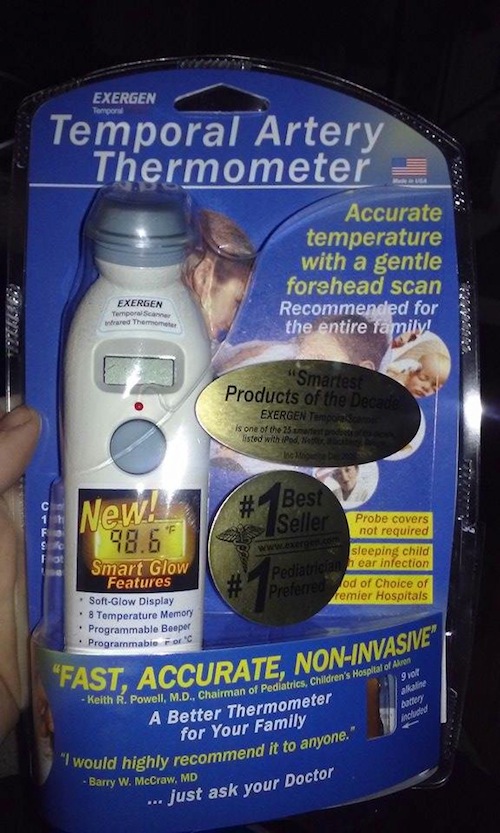 Well, Halloween is a few days away. It’s fall. I told my son’s bus driver today in jest that I thought Mother Nature might be going through her changes. It’s hot. It’s cold. It’s hot again. (70 today). A cold 40 is forecast for this weekend. The huge temperature fluctuations only make the onset of cold and flu season seem to arrive earlier. We’ve had an Exergen thermometer for several years. Contributing editor Lara had never tried an infrared thermometer so I asked her to check it out and let me know what she thought.
For those unfamiliar with the Exergen Smart Glow TemporalScanner, it is an infrared thermometer. Basically it captures the body’s temperature by scanning the heat emitted from the forehead through the temporal artery. The original TemporalScanner you might have seen previously has been updated, and now comes with four features that make it even easier to take a temperature:

The Exergen Smart Glow TemporalScanner is favored by renowned pediatrician and author Dr. Laura Jana for its ease of use. Temporal artery thermometry is among the most accurate and convenient methods to take a sick child’s temperature – and it is backed by more than 50 clinical studies proving its accuracy. 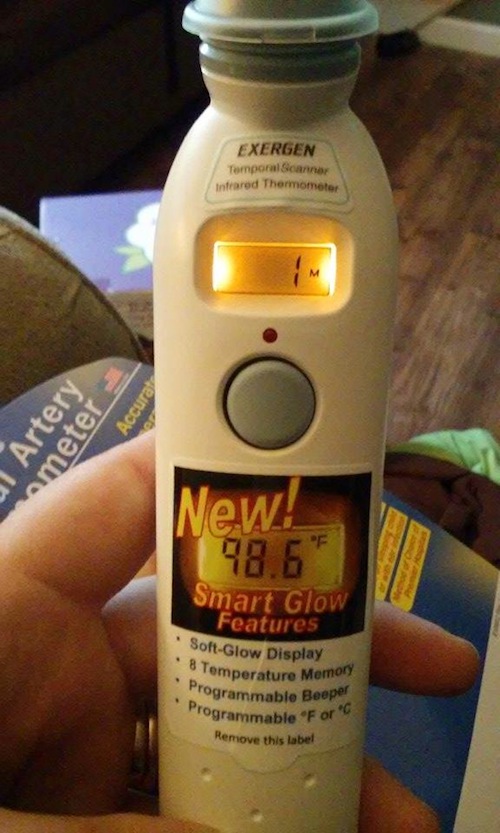 Here’s what Lara thought.
Being a mom of 6 and having all of my kids in different stages of life taking temperatures isn’t always a simple thing. I have a baby who needs a rectal temp, three very young children who don’t quite understand under the tongue and two older children who do under the tongue. It was nice to be able to swipe the Exergen Smart Glow TemporalScanner across the forehead and that be the end of it. Taking temperatures was easy to do on all of them. The older kisds showed the younger ones that it’s easy and that it doesn’t hurt. I also like the light up feature for those late at night checks.
The Exergen Smart Glow TemporalScanner is sold in major retailers including Wal-Mart, Target, Walgreens, Rite Aid, Costco, Babies “R” Us, Toys “R” Us, Kroger and BJ’s. The suggested retail price is $49.99.
CONNECT
Exergen website – Exergen on Twitter – Exergen on Facebook

One (1) winner will receive their own Exergen Smart Glow TemporalScanner Infrared Thermometer.

Enter using the Giveaway Tools widget below. The winner will be selected by the Giveaway Tools widget. If you’ve entered any of my giveaways before then you know that you must complete the mandatory required entry, and that only comments containing all of the requested information will be eligible for entry. US addresses only please, no PO Boxes. Good luck to everyone!

What’s your biggest challenge when taking your child’s temperature?

My biggest challenge is waking them when they are sleeping and you need the temp, knowing they feel hot and they do not want to wake. Tired and sick which makes it difficult

My biggest challenge is reading it, not fun, and keeping our kids still long enough to get a reading.

The biggest challenge is getting the child to keep their mouth closed when taking a oral temp. With this Thermometer I will not have to worry about this because I can put it on the child’s forehead!!

My granddaughter refuses to open her mouth and does not sit still while we put the thermometer under her arm.

My biggest challenge is getting them to sit still. Thank you for the wonderful giveaway.
Erin
fairyfractal at gmail dot com

To be honest, I don’t have a challenge taking the kid’s temperature with the new devices of the day.

The biggest challenge is getting the kids to sit still while I try to take their temperature.

Getting them to stay still for it.

The biggest challenge is getting them to be patient enough to wait until I get the reading.

The biggest challenge is getting her to hold it in her mouth until it’s finished taking her temp.

My challenge is getting my kids to sit still while I take their temp.

To me, the biggest challenge in taking a child’s temperature is keeping them still long enough to get the temperature reading.

whatever happen to hand on forehead in lieu of themometers? if a problem, always go to the doctor.

It’s so hard to keep my babies still

Which reminds me–time to get a new thermometer.

The biggest challenge is focusing my eyes!

My biggest challenge with my current thermometer is getting my little one to hold still long enough to get an accurate reading.

keeping them still long enough to take their temp

Getting my grandchildren to stand still long enough to take their temperature.

Trying to get them to sit or stand still long enough to get a reading.

My biggest problem is holding the thermometer under the tongue so long. I have dropped and broken so many of them.

Getting a toddler to hold still

Keeping it under their tongue for so long.

the biggest challenge is getting them to sit still!

My biggest challenge is to keep them still while I take it!