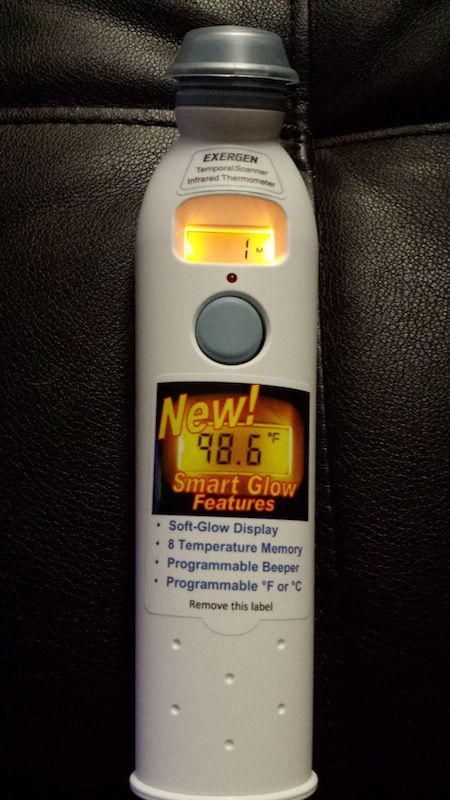 Last year my son gave us all quite a scare. He had what seemed to be a little cold and a low grade fever. I gave his some Tylenol and continued to check his temperature. I noticed shortly after checking his temperature he start to have jerking movements. He was only 15 months old at the time and had never had anything like this before. So,as any parent would, we rushed him to the emergency room. His fever was not dangerously high and these issues continued for a few days. After running every test you could think of they finally diagnosed him. Febrile induced myoclonus. Something I have never heard before. Doctors explained this is something that could never happen again or if it did, he should out grow in a few years. After bringing him home from the hospital I remember going to the store and buying almost every thermometer they had. I kept them all over, bathroom , his room, diaper bag, my purse and each car. So nervous this will happen again, I am constantly checking his temperature.

A few weeks ago I received the Exergen Temporal Artery Thermometer just in time. Everyone in my house came down with something and it was time to test it out. The Exergen thermometer is #1 pediatrician preferred and accuracy tested by more than 50 published medical studies. I must admit I was a little intimidated to use something that seemed so high tech compared to the traditional thermometer. After reading the directions I discovered it was actually really easy to use. Make sure you read the directions to get a correct reading. The Exergen temporal scanner thermometer works by capturing naturally emitted infrared heat and captures the highest temperature. To use the thermometer first remove the protective cap over the probe. Hold your thumb or index over the scan button but do not push just yet. Place the probe flat on the center of the forehead. Now, press and hold the scan button and lightly slide the thermometer across the forehead over to the hairline. Make sure to keep the probe flat and in contact with the skin for the entire scan. Release the scan button and remove the thermometer from the head once you have reached the hairline. You will hear a beeping and a red light will flash during the scan. That is just to let you know that a measurement is taking place.

As I said before, it was really simple to use. It was also quick. It took about 2-3 seconds for a reading. My son never sits still,even when he’s sick. Using a thermometer under his arm was always trying as he is always squirming all over the place. He actually thought this thermometer was neat and did not move for the whole 2 seconds! There are also some neat features on the Exergen thermometer. When my son is sick I always find myself writing down what his temperature readings are in case I did not remember. This thermometer will store your last 8 readings. You can also use it while your child is asleep. The device has a feature where you can turn off the sound. The display also glows so you can read the temperature at night. I used it on my son while asleep and had no problem! Just make sure you scan to the side of the head that is exposed otherwise you will get a scary high temperature reading. This product is not just for your children, anyone can use it. My husband and I both have. I without a doubt, trust this product 100% and have been recommending it to other parents.

Who remembers how temperatures used to be taken?

#WW With Linky – My Name Is Valerie And I’m…

Wow, sorry about your scare with your son. I would be flipping out. But so glad to hear he will outgrow it. I think this thermometer is great, something that gives a reading in 2 to 3 seconds with impatient always moving toddlers is a must! Thanks for the review!

we have this and love it – great for when you have little ones – you can use it when they are sleeping and they do not wake up!

I need this! My son is 11 and it’s a pain to try to take his temp with an oral thermometer. Especially when a child is feeling badly, it’s difficult to get them to hold a thermometer in their mouths properly for long enough time.

Love the features on the thermometer, my son is such a pain when he is sick! Thank you for sharing!

I remember the old glass thermometers that had to be used orally or optimally rectally. Over the years came strips, ear thermometers, now these. The first digital ones were pricey. Hopw do these fare costwise?