9 Clues: The Secret of Serpent Creek Revealed On Mac – $2 Off Full Unlock For Limited Time Only

New for Mac from G5! Looks to be part hidden object, party puzzle and part adventure! 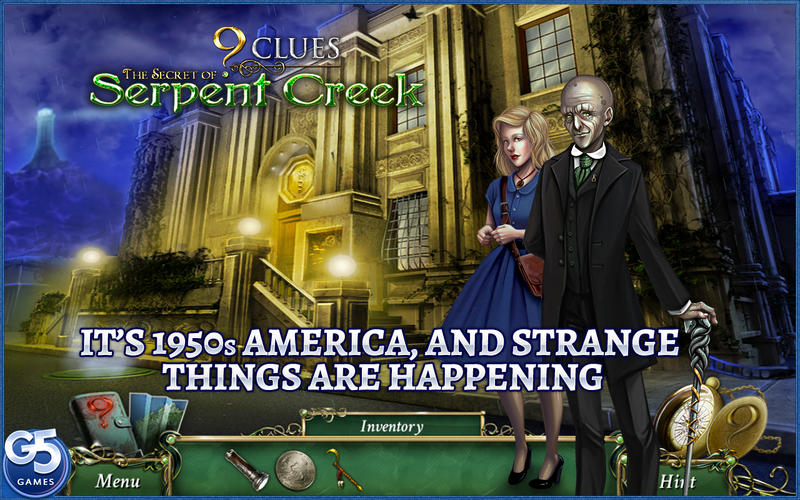 9 Clues: The Secret of Serpent Creek Revealed on Mac Today, care of G5 & Artifex Mundi
Reveal the evil that clutches Serpent Creek and stop a nefarious plot to bring the Snake God back to our world!
San Francisco, California – April 16, 2014 – The evil forces have decided that the town of Serpent Creek is the best place to perform the ritual to revive Snake God. In the newest, eerie hidden object adventure game from G5 Entertainment and Artifex Mundi – 9 Clues: The Secret of Serpent Creek, you will have to save the town from this terrifying threat! The game arrived to the Mac App Store today, so download it to your Mac and start your rescue mission right away! No time to lose!
Your closest friend, journalist Helen Hunter, traveled to the coastal town of Serpent Creek to report on the Serpent Festival. Now she’s missing, and the last phone call she made was to you. As a paranormal private investigator, Helen wanted you to weigh in on some frightening things she’d discovered. She asked you to come immediately.
The first thing you see upon arriving in Serpent Creek is a humanoid, snake-like creature. Clearly, Helen’s fears were not groundless. It seems the town’s streets are crawling with snakes, the ground shakes with violent tremors, people are sleepwalking and to make matters worse, no one remembers a blonde journalist. You’ll have to investigate mysterious locations and solve challenging puzzles to piece together clues about what happened to your best friend. Reveal the evil that clutches this crippled town and stop a nefarious plot to bring the Snake God back to our world!
Here’s the trailer.

9 Clues: The Secret of Serpent Creek brims with eerie atmosphere, features immersive storyline, crisp graphics and pleasant voice over. It features an innovative detective mode that fans of the genre will love – on some hidden object scenes items on the search list (such as fingerprints, blood stains or murder weapon) are revealed only after you have located them. When the list is completed, you’ll have a retrospective of events that happened on the place. Hours of tense and pleasant gaming experience await you in 9 Clues. The game is developed by Artifex Mundi and published on Mac OS by G5 Entertainment.
Key Features:
– 53 eerie locations
– 13 clever puzzles and mini-games
– Six strange characters
– 19 achievements to unlock
– Thrilling story set in 1950s America

Prefer reading mysteries to playing them.