Lots of people like to serve cake when they receive holiday guests. Others like to bring a cake when they’re visiting family or friends. For something a bit out of the orderinary, the Bauducco Panettone is a great choice. 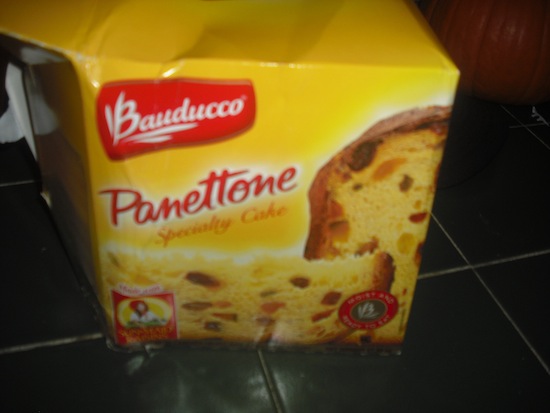 We received a Bauducco Panettone, the Sun-Maid Raisin variety. The cake comes with a paper shell around the bottom and is completely wrapped. 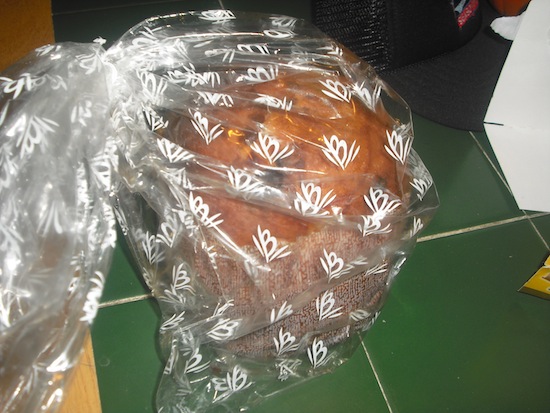 This is what the Panettone looks like unwrapped. Forgive the bad picture, I’ve been having a terrible time with my camera lately. 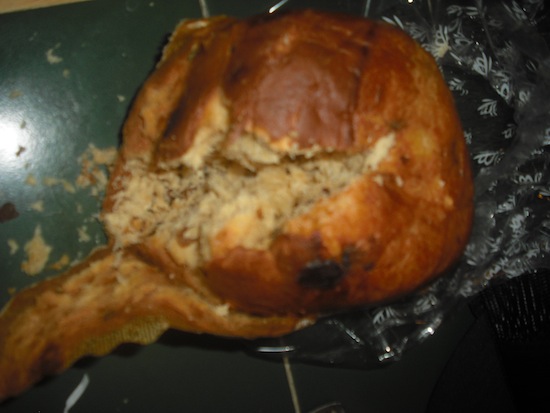 Bauducco Panettone would make a great choice for holiday entertaining.

Enjoyed for centuries during the holiday season in Italy, panettone – a sweet, specialty cake typically incorporating raisins, dried fruit and candied citrus peel – can add an unexpected twist to your holiday table.

“In Italy, panettone is a staple from late November through New Year’s, served as a dessert, at breakfast with coffee, and even in recipes like French toast,” said Lucinda Scala Quinn, author of MAD Hungry: Feeding Men & Boys, Lucinda’s Rustic Italian Kitchen and an expert in Italian culinary traditions. “But it has been hard to find in America, limited to gourmet specialty stores in cities with large Italian-American populations.” Now, Bauducco Foods, a Brazilian food company with Italian roots, is looking to change that by introducing panettone into grocery stores across the U.S.

Made in the authentic Italian fashion, Bauducco Panettone incorporates the highest quality ingredients like Sun-Maid raisins and – in a new take on tradition – Hershey’s chocolate chips. “With its subtle sweetness and light texture, panettone is more versatile than traditional cakes. I like it on its own, or topped with ice cream or powdered sugar,” said Scala Quinn. “It pairs well with dessert wines or Champagne for an after-dinner treat, or coffee or hot chocolate in the morning.” – more –

The Story of Panettone
While there are various versions of the story of panettone, all of them take place in northern Italy, near Milan. One version of the story centers around a baker’s helper named Toni, who accidentally knocked raisins into a bowl of bread dough, and then tried to remedy the situation by adding more dried fruit, sugar, butter and eggs. He baked it and gave it to his employer, who hailed the new creation and named it “pane di Toni” (Toni’s bread, in Italian). In another legend, Toni the baker is deeply in love and concocts the recipe to win the respect of his beloved’s father. In reality, the recipe developed from the Romans, who made a bread enriched with fruit similar to panettone.

“The story of panettone is a big part of its appeal,” said Scala Quinn. “How perfect for a holiday treat to have developed out of an intense love.”

Panettone as a Gift
In addition to being served to friends and family throughout the holiday season, panettone is also typically given as a hostess gift in many countries, in lieu of flowers or wine. “It’s such a lovely and, at least in the U.S., unexpected gesture to give a panettone,” said Scala Quinn. “I give it decoratively wrapped, and attach a card with a serving idea or two on one side, and the story of panettone written on the other.”

Bauducco panettone will be available for the 2010 holiday season beginning in October at grocery stores nationwide. For more information on Bauducco panettone, as well as recipes and serving suggestions, visit www.bauducco.com.

About Bauducco Foods
Founded in 1952 in Sao Paulo, Brazil, by Carlo Bauducco, Bauducco Foods is the leading manufacturer of baked goods in Brazil and is the largest maker of panettone in the world, exporting to 80 countries. The company employs 3,000 full-time and 2,300 seasonal workers. In addition to panettone, Bauducco produces cookies, wafers, roll cakes, toasts, bread sticks, shortbread and tea biscuits. Bauducco’s base of operations in the U.S. is in Miami; the company serves a variety of retailers with the support of partners, distributors and an accomplished sales team.

The product featured was provided free of cost to me for the sole purpose of product testing, review or inclusion in the gift guide. This post has not been monetarily compensated and is based on the views and opinions of my family and/or self. Please note that the opinions reflected in this post have not been influenced by the sponsor in any way.

Hi!
I’m from Brazil and here we love Panettone.
Bauducco is a brand of Panettone and we have a lot of brands and a lot of tastes!
Regards,
Debora

I have been told sliced just right it is perfect for making french toast.