MONSTERS UNIVERSITY – Mike and Sulley in New “got milk?” Ad!!! 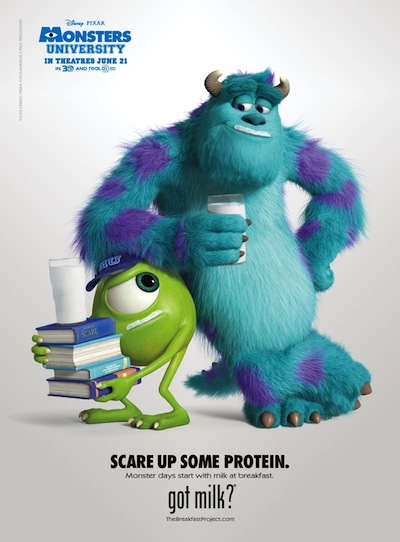 At MONSTERS UNIVERSITY, it takes a lot to fuel a day of scaring and nothing scares up successful days more than a breakfast with milk. A glass of milk – with 8 grams of high-quality protein in each 8 oz serving – can help power your monster days!

Connect with the Milk Mustache community for tips, tools and activities including tasty morning recipes for all the little “monsters” in your family.

From Walt Disney Animation Studios comes “Big Hero 6,” an action comedy adventure about brilliant robotics prodigy Hiro Hamada, who finds himself in the grips of a criminal plot that threatens to destroy the fast-paced, high-tech city of San Fransokyo. With the help of his closest companion—a robot named Baymax—Hiro joins forces with a reluctant team of first-time crime fighters on a mission to save their city. Inspired by the Marvel comics of the same name, and featuring comic-book style action and all the heart and humor audiences expect from Walt Disney Animation Studios, the CG-animated “Big Hero 6” hits theaters in 3D on November 7, 2014.

From producer Jerry Bruckheimer and director Gore Verbinski, the filmmaking team behind the blockbuster “Pirates of the Caribbean” franchise, comes Disney/Jerry Bruckheimer Films’ “The Lone Ranger,” a thrilling adventure infused with action and humor, in which the famed masked hero is brought to life through new eyes. Native American warrior Tonto (Johnny Depp) recounts the untold tales that transformed John Reid (Armie Hammer), a man of the law, into a legend of justice—taking the audience on a runaway train of epic surprises and humorous friction as the two unlikely heroes must learn to work together and fight against greed and corruption.

A Disney/Jerry Bruckheimer Films presentation, “The Lone Ranger” is directed by Gore Verbinski and produced by Jerry Bruckheimer and Gore Verbinski, with screen story by Ted Elliott & Terry Rossio and Justin Haythe and screenplay by Justin Haythe and Ted Elliott & Terry Rossio. “The Lone Ranger” releases in U.S. theaters on July 3, 2013.

LazyTown, the high-powered show that encourages preschoolers to get up and move, will kick-off its third season on Sprout, the 24-hour preschool network, on May 27 at 7:00 a.m. ET. LazyTown empowers kids to make healthy choices –not just by telling them to be healthy through food and exercise, but by showing them! With more action and adventure than ever before, the theme for the third season of this wildly popular series centers around the idea that “all kids are superheros.”

The show features Stephanie – played by new actress Chloe Lang – an optimistic girl with bright pink hair, who comes to live in LazyTown and meets a zany mix of townspeople, including the world’s laziest super-villain, Robbie Rotten. Fortunately for Stephanie, LazyTown is also under the watchful eye of Sportacus – played by Magnus Scheving – an athletic, super-active superhero, who runs, jumps, flips and flies to the rescue in his futuristic AirShip. This season, both Stephanie and Sportacus will have cool new gadgets and vehicles to aid in their adventures.

LazyTown is one of the only global entertainment brands in the world dedicated to kids’ health and well-being and shares Sprout’s commitment to bringing quality programming to preschoolers. Over the past year, Sprout and LazyTown have taken this commitment off-screen as well; Sportacus and Chica (star of Sprout’s “The Chica Show”) went to the White House to shoot a series of PSAs with First Lady Michelle Obama as part of her “Let’s Move” campaign. Both brands have also partnered together with the YMCA for Healthy Kids Day, encouraging families to stay active during the summer.