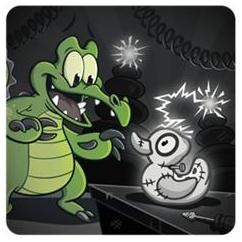 TIM BURTON’S FRANKENWEENIE COMES TO LIFE IN DISNEY’S HIT MOBILE GAME ‘WHERE’S MY WATER? FREE
“10 Days of Frankenweenie” level pack launched today with special black and white levels, a Sparky cameo and new theme music inspired by the film
Burbank, Calif. – September 27, 2012 – Disney launched today “10 Days of Frankenweenie,” a new free level pack for the hit mobile game Where’s My Water? Free. Inspired by Disney’s stop-motion animated film “Frankenweenie,” directed by acclaimed filmmaker Tim Burton, the level pack features new black and white levels that combine the film’s retro look and feel with the gameplay of Where’s My Water?.
Players of Where’s My Water? Free will enjoy the new movie-themed comic panel featuring Sparky, the beloved dog from the film, in addition to the “Frankenweenie”-themed locked level icons, collectibles and more. “10 Days of Frankenweenie” also features a brand-new soundtrack inspired by the film, featuring a child choir, all new music mixes for the levels and spooky sound effects.
From creative genius Tim Burton (“Alice in Wonderland,” The Nightmare Before Christmas”) comes “Frankenweenie,” a heartwarming tale about a boy and his dog. After unexpectedly losing his beloved dog Sparky, young Victor harnesses the power of science to bring his best friend back to life—with just a few minor adjustments. He tries to hide his home-sewn creation, but when Sparky gets out, Victor’s fellow students, teachers and the entire town all learn that getting a new “leash on life” can be monstrous.
A stop-motion animated film, “Frankenweenie” was filmed in black and white and rendered in 3D. The talented voice cast includes: Catherine O’Hara, Martin Short, Martin Landau, Charlie Tahan, Atticus Shaffer, Robert Capron, Conchata Ferrell and Winona Ryder.
Presented by Disney, “Frankenweenie” is directed by Tim Burton, produced by Tim Burton and Allison Abbate, from a screenplay by John August, based on a screenplay by Lenny Ripps, based on an original idea by Tim Burton.
“Frankenweenie” releases in U.S. theaters on October 5, 2012.
Download Where’s My Water? Free for the iPhone, iPod touch and iPad at: http://bit.ly/WMWFree
Download Where’s My Water? Free for Android devices at: http://bit.ly/WMWFreeAndroid

This new feature has me curious–I want to see Burton’s 1984 short that inspired it.