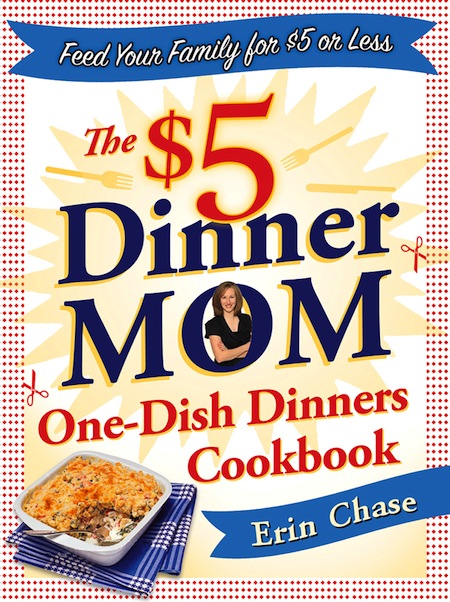 Erin Chase does it again, ready to warm your heart and your family with $5 One-Dish Dinners
Who would turn down a plate of sizzling beef fajitas or a hot and bubbling Swiss Chicken casserole right out of the oven? Who knows how to make all these things easily and for only $5? Erin Chase, The $5 Dinner Mom, that’s who! Erin’s newest book, The $5 Dinner Mom One-Dish Dinners Cookbook is filled with more than 150 one-dish recipes that don’t cost an arm and a leg, are easy to prepare and even easier to clean up after. Here are just a few mouthwatering examples straight from Erin’s kitchen:
Bowtie Pasta with Bacon, Corn and Parmesan
Santa Fe Chicken and Rice Casserole
Skillet Taco Pie
Sausage and Black Bean Soup
Spicy Quinoa with Corn, Beans and Lime
Erin’s even included a few $5-and-under deserts like Mango Raspberry Crumble and Pear, Apple and Caramel Crisp to round out a meal on nights when the budget allows. With her new book, Erin Chase shows America that it’s not only possible to eat right, eat well and stay on a budget. She also shows us how easy it can be to cook, clean up fast, and spend more time with the family.
ERIN CHASE is the creator of 5dollardinners.com and onedishdinners.com. She is the author of The $5 Dinner Mom Cookbook and The $5 Dinner Mom Breakfast and Lunch Cookbook. She’s appeared on The View, The Rachael Ray Show and The Jean Chatzky Show on Oprah Sirius Radio. She lives in Dayton, Ohio, with her husband and three children.

MY THOUGHTS
I received a copy of The $5 Dinner Mom One-Dish Dinners Cookbook.
Chapters include:

There are very few photos in this cookbook. Recipes are simple and easy to understand. Recipes include the cost per meal. This cookbook places importance on saving money, which is why it surprised me that prep and cooking time aren’t included in any of the recipes. It sounds cliche, but time is as valuable as money. The back of the book contains a list of suggested items to keep in the pantry and cooking tools. This cookbook contains a lot of recipes, so it would be good for those that are interested in cooking on a budget or just expanding the range of meals they cook.
MORE INFO
Tour Dates for $5 Dollar Dinner Mom One-Dish Dinners

You had me at bacon 🙂