My son is 15. By definition fifteen means that you are probably interested in smelling good when you go out in public. He’s already found a couple of colognes that he likes but he also likes body sprays. He especially likes body sprays when he’s running from one place to another or just wants to freshen up (or whatever guys call it). We were recently introduced to a new body spray, Tattooed By Inky.

ABOUT TATTOOED BY INKY

Tattooed By Inky!, a new fragrance collection, just launched at Target stores for the price of $5.99 each. According to the company, the “high quality” body sprays are inspired by the cult of self-expressive body art and spins this phenomenon into a modern collection that celebrates individuality and personal style.

Targeted to a young, hip, trendy audience, lightly fragranced body sprays have become a popular everyday beauty/grooming essential for both sexes. Used after showering or as a pick-me-up during the day, these body sprays refresh and revive the senses, with just the right amount of scent. The Tattooed By Inky collection offers five distinctive scents: two men’s, two women’s and one unisex: 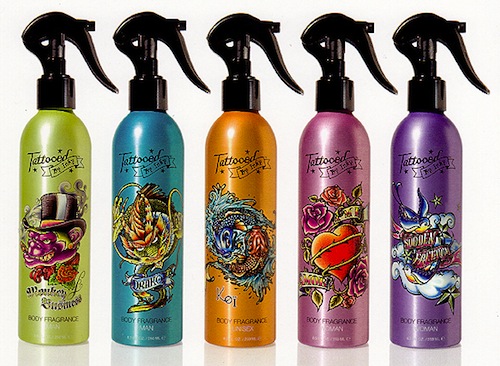 We received samples of the Drako (for guys) and the A Mi Amor (for girls). These body sprays come in cans that are cool to the touch and pretty cool to look at too. One quick spray is enough to leave a nice scent (or temporarily hide a bad one, LOL).  My  son thought the Drako smelled great and said he liked it enough to keep wearing it. It costs much less then the spray cologne he likes so I’d be more then happy to buy it for him and save some money. I’m going to pick him up a second one to leave in school, since he doesn’t like to feel sweaty and gross after gym. I tried the A Mi Amor myself. I found it to be light and refreshing, and not super duper flowery. We’re both curious about the Koi scent (the unisex one) and what that smells like.

Tattooed By Inky body sprays are priced at $5.99 each and are available to purchase at Target.

Nothing takes the place of soap and water.

My sons 13 and is all about smelling and looking good. This sounds like something that he would say “Mom, I NEED it.”

I am quite familiar with the NEED it card. It comes with a very specific look and tone of voice, LOL.