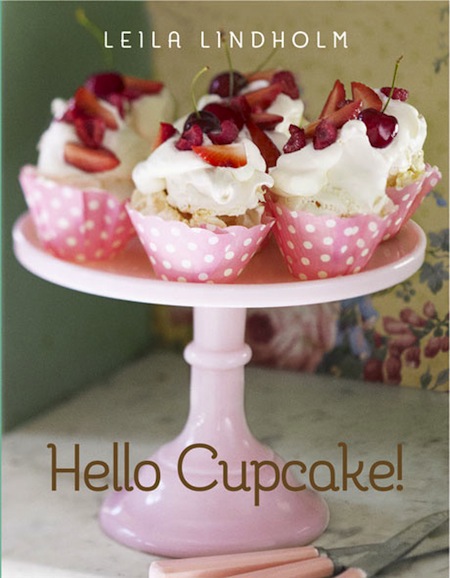 Hello Cupcake has heaps of delicious ideas for cupcakes and whoopie pies so you’ll find the perfect treat for every taste and occasion. Leila Lindholm will inspire everyone who is planning a party for adults or children with thoroughly tested cupcake recipes topped with decadent frostings and garnishes. You’ll also meet cupcake’s best friend – the whoopie pie – which is filled with tempting frostings. Allow yourself to be inspired and take a bite out of the sweet life.
Offers 45 recipes of delectable cupcake edibles such as: Sweet Potato, Rock Road, French Meringue, Nutty Pistachio, Nutella, Miss Piggy, Classic and much more. Plus recipes for Lemon Meringue, Double Chocolate and Bling whoopie pies!
Leila Lindholm, of Swedish-Moroccan background, began her career in the restaurant world. During her career as a chef, Leila has worked at several well-known restaurants including Aquavit in New York, Operakällaren and Fredsgatan 12 in Stockholm. Today she works primarily in TV, where she has gained a huge following. Her primetime cooking show is called Leila’s Food and airs on Swedish lifestyle channel, TV4 Plus. She also frequently appears cooking her simple and fast recipes on the biggest morning show in Sweden, the TV4 Morning News show, whose viewers voted her ‘TV Chef of the Year’ in 2004. Her previous cookbooks, A Piece of Cake and One More Slice, both published by New Holland, have sold thousands of copies and in several countries including the US, France, Germany, Holland and Italy.

MY THOUGHTS
I received a copy of Hello Cupcake. There are no chapters in the book but there is a table of contents in the beginning listing every recipe with the book. Recipes are well written and easy to understand. There are softly colored pretty photos on almost every page and with each recipe. Missing are cooking and prep time, which I feel is invaluable in a cookbook. Recipes I am looking forward to trying include Blueberry Lemon Cupcakes, Chocolate Swirl Cheesecake Cupcakes, Strawberry Cupcakes, Jane’s Apple Pie Cupcakes and Chocolate Whoopie Pies, amongst others. This cookbook would be great for anyone that likes to bake or entertain.
The product(s) featured in this review was provided free of cost to me for the sole purpose of product testing and review. This review has not been monetarily compensated and is based on the views and opinions of my family and/or self. Please note that the opinions reflected in this post have not been influenced by the sponsor in any way.