written by Valerie, Mom Knows It All
34 comments
FacebookTwitterPinterestEmail

Any Modern Family fans out there? 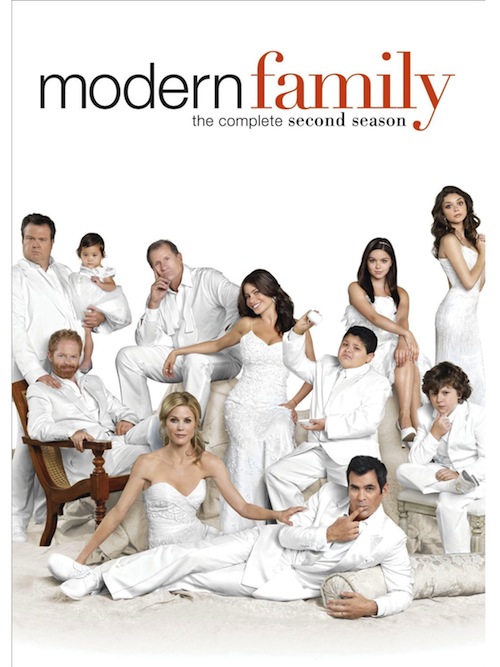 The #1 Scripted Comedy of the Season, nominated for 17 Primetime Emmy Awards Arrives on Blu-ray and DVD September 20th

America’s favorite extended family is back for even more laughs when Modern Family: The Complete Second Season

Packed with tons of exclusive features and never-before-seen footage, “MODERN FAMILY” THE COMPLETE SECOND SEASON Blu-ray and DVD will satisfy even the most diehard fans. Each set includes all 24 episodes of the critically acclaimed hit plus deleted family interviews, extended and deleted scenes, a hilarious gag reel, a music video and much more.

The Pritchett clan has Jay sitting at the head, a true guys’ guy experiencing a bit of mid-life crisis, has remarried a much younger wife, Gloria, whose passion and loyalty is matched by her 11-year-old son, Manny, a boy wise beyond his years. Blending together into this new family has quite the learning curve with some culture clashes, a few awkward misunderstandings, and plenty of sweet victories along the way

Jay’s grown daughter, Claire, has her own family. Claire and Phil are the proud parents of three kids with whom they want that open, healthy, honest relationship. It’s not always easy, especially when you have a teenage daughter who’s growing up a little fast, a too-smart-for-her-own-good middle daughter and a scatterbrained boy. On top of that, Phil wants to be the “cool dad,” while Claire is just trying her best to run a tight ship, determined not to let her kids have the rebellious childhood she had.

Claire’s brother and Jay’s grown son, Mitchell, adopted a Vietnamese baby with his partner of five years, Cameron. Opposites attract in this household, with Cameron having a wonderfully big personality and maybe a flare for the dramatic, whereas Mitchell is the more serious of the two. They balance each other out and are doting fathers trying to do their best as new parents.

All of these three families are unique unto themselves, and together they give us an honest and often hilarious look into the sometimes warm, sometimes twisted embrace of the modern family.

Patriarch Ed O’Neill recently received a star the Hollywood Walk of Fame, which you can watch here –> http://www.youtube.com/watch?v=6yn0KHPxhZY

ONE winner will receive the Modern Family Complete Second Season on DVD.

I’ve never seen the show Modern Family. To enter leave a comment here telling me who your favorite character is and one thing you like about the show.

BONUS ENTRIES – LOTS OF THEM!

1 – Blog about this giveaway, including a link here.

1 – Visit one of my other blogs – From Val’s Kitchen, Val’s Views, Game Review Network and Living With Special Needs – and leave a comment on any post there. Then return here and leave a comment on this post telling me one thing you read or learned there. (That’s two comments you need to leave for this bonus entry, one there and one here.) Unlimited entries for this method of entry.

1 – Visit HereAndThere.US (my Mom) and leave a comment on any post there. Then return here and leave a comment on this post telling me one thing you read or learned on my Mom’s blog. (That’s two comments you need to leave for this bonus entry, one there and one here.) Unlimited entries for this method of entry. Leave an additional comment for each entry you qualify for. You must have completed the first entry according to the instructions to be eligible for any bonus entries.

The winner will be selected using the “And the winner is” plugin. US addresses only please, no PO Boxes. This contest will end on Tuesday 09/20/11 at 11:59 pm est. If you’ve entered any of my giveaways before then you know that only comments containing all of the requested information will be eligible for entry. The winner must contact me to confirm they wish to receive the prize within two days of my email notifying them they’ve won. Good luck to everyone!

Disney Recipes To Celebrate The 70th Anniversary Of Dumbo

I love this series. It is hard to say who my favorite character is, because I like them all. I would say Claire is my favorite. What I like most about the show, is that it is about acceptance. No matter how crazy your family gets, to accept and love them as they are.
twoofakind12@yahoo.com

I am a email subscriber.
twoofakind12@yahoo.com

I like Claire she so sassy & handles things in a bungling way ha ha…. my fave show 4 sure

I’ve not seen this show but would like to.
gourdsrmylife(at)yahoo(dot)com

I have never seen the show either, but I have heard that it is very funny!

I’ve never seen it either, but would love to watch it. I’ve heard great things!

Love the show, lots of laughs in this comedy series. We have never seen one show that we didn’t laugh out loud.Great timing on all the jokes. My favorites are Cam and Mitch

liked you on FB and commented on your wall

Gloria for sure
I love the mixed blend of all characters actually, this show never gets boring

Thank you for hosting this giveaway

I am an email subscriber

I added your feed to my google reader

following you on twitter @left_the_stars
I tweeted your giveaway

My husband and I just started watching this show and as parents, we think that Phil and Claire are hysterical!

Thanks for the chance to win this and surprise my husband.
mruble38@gmail.com

I subscribe via RSS feed
eswright18 at gmail dot com