written by Valerie, Mom Knows It All
14 comments
FacebookTwitterPinterestEmail

This is a sponsored post. All information on the First Ride program was provided to me by Mitsubishi or its agent. Please note that, as always, any personal opinions reflected in this post are my own and have not been influenced by the sponsor or compensation received in any way.
I have a number of young nieces and nephews, none of whom are in New Jersey at present. One of them did live here until about a month or so ago, when my youngest brother moved out to Ohio with his wife Lisa-Marie and son Alex. I’d had the pleasure of spending a good amount of time with my nephew Alex in the months before they left. But in spending that time with him, I was reminded of a number of things, including what a challenge car seats can be for some people. One day I offered to watch Alex for the day. In order to be prepared, my sister-in-law left his car seat with me. Well, I couldn’t even get the darn thing into my car correctly. It was a flashback to when my oldest was born. I’d had to have my Dad help me get that car seat in the first time around too. Once I had my refresher I was good to go. I’m not alone. You would be surprised to know how many parents don’t know how to install or use a car seat properly. The new and innovative First Ride initiative  currently being offered by Mitsubishi Motors focuses on safety while educating parents. 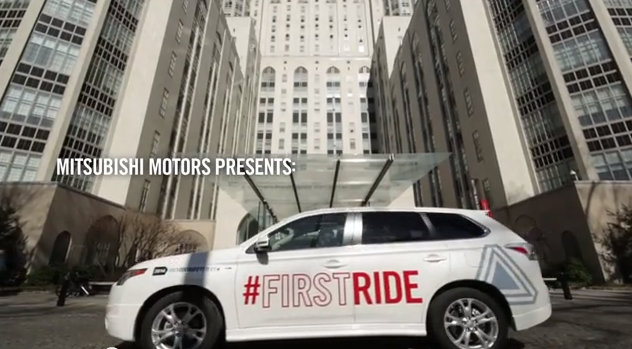 “Every day, thousands of newborns in New York City and around the nation leave hospitals in infant car seats and head home for the first, most important time,” says Jessica Robinson, Engineer, Vehicle Verification and Testing at Mitsubishi Motors R&D of America, Inc. “However, most people don’t realize that 73 percent of all child safety seats are not installed or used properly nor do they consider the safety of the actual car driving them home.”

Instead of making the journey home through the streets of New York City in a taxi – an experience that does not legally require a car seat – the parents participating in Mitsubishi Motors’ “First Ride” event opted for a ride home from the hospital with their new bundles of joy in a fully-equipped 2014 Mitsubishi Outlander – an Insurance Institute for Highway Safety (IIHS) highest-rated “Top Safety Pick+” vehicle piloted by professional drivers. Their touching personal stories have become a series of short web films that contrast the craziness of the streets of the big city, with the calm, precious moments shared between three newborns and their parents.
Meet the Families
The Poulin Family, Brooklyn, NY  – Bumps in the Road
The couple first met in 2007 and began briefly dating, then went their separate ways; they reconnected in 2008, married 3 1/2 years ago, and have been together ever since. Simeon and Janina were starting to look into fostering a child when Janina unexpectedly became pregnant. At six months, Janina became seriously ill and was admitted to the hospital, giving the couple the biggest scare of their lives. However, baby Poulin arrived healthy and happy eight days after Janina’s due date – a remarkable story of how love can overcome many obstacles. For their “babymoon” the couple traveled to Paris for a romantic getaway.

Carlos and Kristal first met 6 years ago when Carlos applied for a job at the restaurant where Kristal worked as a hostess. Carlos and Kristal got engaged this past Fourth of July. The Ortiz Family was very nervous about having their first child. Carlos was raised in a single-parent household, so he is especially looking forward to giving his firstborn something he never had growing up – a father figure. Both Carlos’ and Kristal’s grandparents were on hand at the hospital for baby Ortiz’s birth

The Arty Family , Long Island, NY –  The Miracle Baby
The couple first met 13 years ago in their freshman year at college while attending Hofstra University on Long Island. The Arty Family – over the course of three years – consulted with three different doctors, and new mom Jamie went through five surgeries, seven outpatient procedures and three in vitro fertilizations (IVF). New dad Frantz accompanied Jamie to every one of her doctor’s appointments for three years straight. Those were trying times…but the end result is truly priceless as along came Baby Arty.

Families looking to get expert help on installing child safety seats can find free inspection services by using the Child Car Seat Inspection Station Locator
or by downloading the free NHTSA mobile app SaferCar.
The all-new 2014 Mitsubishi Outlander was one of only four vehicles in the “Small SUV” category to receive the non-profit organization’s highest “Top Safety Pick+” designation in its crash testing evaluations. This was due to an exemplary performance in the various stringent crash testing criteria as well as the Outlander’s optional radar-based Forward Collision Mitigation (FCM)2 accident/impact reduction technology – a system that includes both audio and visual warnings to the driver as well as initiates automatic braking if necessary – and a requirement for a vehicle to receive the “plus” distinction from the IIHS for 2014 Top Safety Pick.
“When the all-new 2014 Mitsubishi Outlander was named an IIHS ‘Top Safety Pick+’ for the second year in a row, we were inspired to prove the benefits of riding in one of America’s safest crossover vehicles in a critically important way,” adds Robinson. “High vehicle safety ratings should be a priority – with or without children. And finally, a couple of extra minutes making sure you know how to properly install and use child safety seats could be a life saver.”
With a starting MSRP of only $22,995, the 7-passenger 2014 Mitsubishi Outlander comes with many innovative standard safety features:
– Hill Start Assist (HSA)
– 7 air bags including driver’s side knee air bag
– Active Stability Control (ASC) with Traction Control Logic (TCL)
– Patented Reinforced Impact Safety Evolution (RISE) energy-absorbing body/chassis safety cell technology
In addition to its included safety features, the all-new Mitsubishi Outlander is available with advanced high-tech safety systems including Lane Departure Warning (LDW), Adaptive Cruise Control (ACC) and Forward Collision Mitigation (FCM)2.
About Mitsubishi Motors North America, Inc.
Mitsubishi Motors North America, Inc., (MMNA) is responsible for all research & development, manufacturing, marketing, sales and financial services for Mitsubishi Motors in the United States. MMNA sells sedans and crossovers/SUVs through a network of approximately 400 dealers. MMNA is leading the way in the development of highly-efficient, affordably-priced new gasoline-powered automobiles while using its industry-leading knowledge in battery electric vehicles to develop future EV and PHEV models. For more information, contact the Mitsubishi Motors News Bureau at (888) 560-6672 or visit media.mitsubishicars.com.
MORE INFO on Mitsubishi Motors
Mitsubishi on Facebook
Twitter @mitsucars
Mitsubishi Cars YouTube channel
Mitsubishi Motors on Instagram

How did you KNOW that your child’s car seat was installed properly and that you were using it correctly? I’d really like to know, please leave a comment!

This is so awesome, what a creative program! I love the looks of these vehicles and with seating for 7, it’s perfect for our family of 5!

I will be sharing this with my co-workers who all have kids who ride in car seats, thank you for sharing!!

Wow, this is an amazing program. What a great idea! You can never be to safe when it comes to transporting kiddos! Thank goodness for awesome resources like this and user manuals!

Like you, I had help the first time. It can be a real challenge!

We always had ours doubled checked before bringing baby home. After three kids my husband is an expeert. I trust him with install!

I feel like you can never be too safe when it comes to your children!

This is a really great program. I had the hospital nurse look at the carseat before we left with our first. Gave me confidence we were doing it right.

I think it is wonderful that this car company is helping to educate the community about properly installing baby seats.

What a great program! That’s a seriously great price, too. I will have to tell my friends who are expanding their families!!

i love love love this. the stories, the program. kudos to mitsubishi.
and it horrifies me that you can bring babies in cabs without a car seat. no way, man.

Car seats are indeed a challenge to properly install. Hubby and I tired of switching two seats each time we drove a different car solved things by buying two sets.

My dad started the car seat check her in CO and he loves programs like this. I always have him check mine and he runs checks at the fire stations here too, its great and saves lives.

Ensuring that my child is safe has always been my #1 goal. The staff at the hospital actually came out with us when we took Bubbles home for the first time, and they looked to make sure we had a carseat and that it was installed properly. Plus my husband and I had both read the manual and tested the security of the seat like 50 times before we left for the hospital!

I don’t think I did know if it was installed correctly for sure. I just assumed I did it right. Yikes, what a risk, huh?