Celebrate the Sing-Along event of the year with your own copy of Mamma Mia! Here We Go Again Sing-Along Edition on Blu-ray on October 23, 2018. 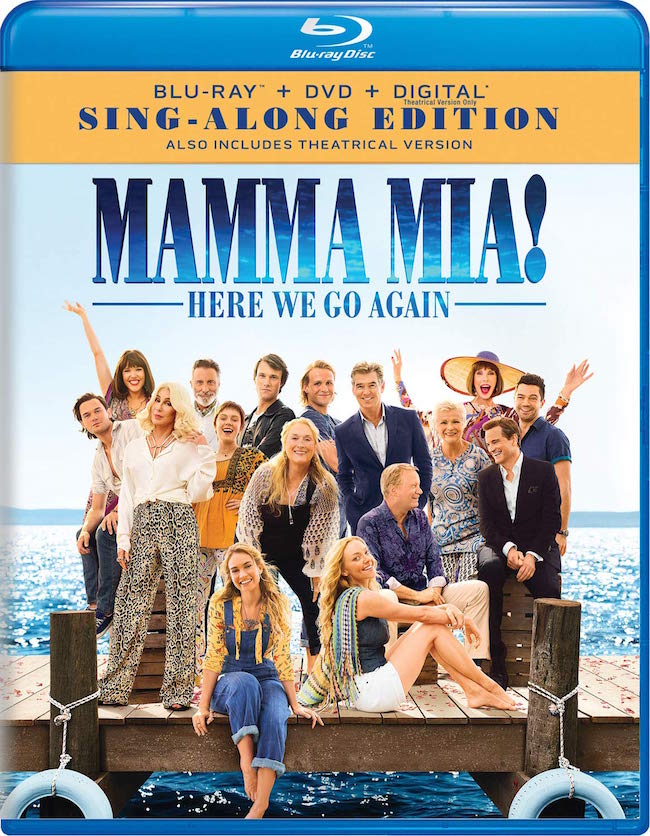 I remember hearing ABBA songs on the radio when I was growing up. I didn’t see MAMMA MIA! The Movie but if it was anything like MAMMA MIA! HERE WE GO AGAIN I can only guess it was great fun. This fun sing-along edition of the movie gives you the hit movie and a ton of extras, enough to keep you singing for days (or at the very least hours). It’s a great holiday gift for anyone who enjoyed the movie, and would also be terrific for a fun at-home karaoke night with family or friends.

Ten years after MAMMA MIA! The Movie, MAMMA MIA! HERE WE GO AGAIN invites you to return to the magical Greek island of Kalokairi to continue the story’s emotional journey of family and friendship whilst discovering just how those life-changing relationships were formed and includes hit songs such as When I Kissed The Teacher, Fernando and Dancing Queen.

Both a prequel and a sequel, the film tells two stories: present day as Sophie Sheridan (Seyfried) prepares for the grand reopening of her mother Donna’s (Streep) hotel and 1979 when young Donna (James) first arrives on the island. Sophie learns about her mother’s exciting, fun-filled adventures with the young Dynamos, Tanya (Jessica Keenan-Wynn) and Rosie (Alexa Davies), and how young Donna first met her three possible dads Harry (Hugh Skinner), Bill (Josh Dylan) and Sam (Jeremy Irvine) all those years ago. Deemed as “a relentlessly sunny musical romp” by Leah Greenblatt, Entertainment Weekly, MAMMA MIA! HERE WE GO AGAIN is filled with summer fun, joy and romance that allows audiences to tap into their inner dancing queens in their own living rooms! Get ready to sing and dance all over again with the entire cast and go behind the scenes with MAMMA MIA! HERE WE GO AGAIN on Digital, 4K Ultra HD, Blu-rayTM and DVD – with over an hour of bonus material.

KEEP UP ON SOCIAL MEDIA