I’ve known for years that Maleficent is one of my Mom’s favorite Disney villains if not her most favorite villain. 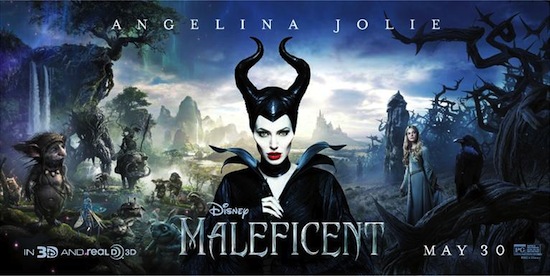 The new “Legacy” featurette, from  MALEFICENT, featuring a behind-the-scenes interview with Angelina Jolie, is now available.

“Maleficent” explores the untold story of Disney’s most iconic villain from the classic “Sleeping Beauty” and the elements of her betrayal that ultimately turn her pure heart to stone. Driven by revenge and a fierce desire to protect the moors over which she presides, Maleficent cruelly places an irrevocable curse upon the human king’s newborn infant Aurora. As the child grows, Aurora is caught in the middle of the seething conflict between the forest kingdom she has grown to love and the human kingdom that holds her legacy. Maleficent realizes that Aurora may hold the key to peace in the land and is forced to take drastic actions that will change both worlds forever.
The film stars Angelina Jolie as Maleficent, Sharlto Copley, Elle Fanning, Sam Riley, Imelda Staunton, Juno Temple and Lesley Manville.
“Maleficent” is produced by Joe Roth and directed by Robert Stromberg, with Angelina Jolie, Michael Vieira, Don Hahn, Palak Patel, Matt Smith and Sarah Bradshaw serving as executive producers. Linda Woolverton wrote the screenplay. “Maleficent” opens in U.S. theaters on May 30, 2014.
Also, starting today, fans can enter for a chance to win a trip to the world premiere of the film in the Maleficent “Embrace Your Inner Evil” Sweepstakes. Fans can enter by recreating Maleficent’s laugh and posting the video to Instagram using #MaleficentLaughSweeps. Official Rules: http://di.sn/MaleficentLaugh.
Like MALEFICENT on Facebook: facebook.com/DisneyMaleficent
Follow MALEFICENT on Twitter: @Maleficent
Instagram: http://instagram.com/disneystudios
Pinterest: http://www.pinterest.com/disneystudios/maleficent/
Tumblr: http://disney.tumblr.com/
MALEFICENT releases in theaters everywhere on May 30th!

Fairytales lend to many different tellings.

She’s my favorite, I am just not sure I am going to go see the movie. I do think AJ was the perfect pic though!

I don’t know that I’ve given much thought to the villains. Cinderella is my favorite story so perhaps the evil stepmother then is my favorite villain….
There is a lot of buzz about this movie.

I can’t wait to see this movie when it comes out to theaters! It looks so good!!!

Maleficent looks awesome. I can not wait to see it.