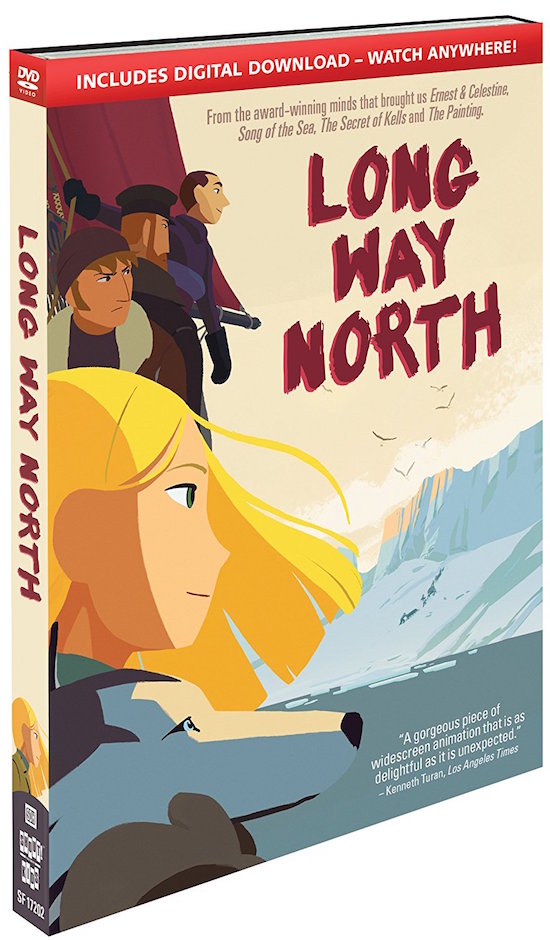 Long Way North is set in late-19th century Saint Petersburg. Sacha, a young girl from the Russian aristocracy, has always been fascinated by the exciting life of her grandfather, Oloukine, a renowned scientist and Arctic explorer who has yet to return from his latest expedition to conquer the North Pole. But Sacha’s parents, who have already made arrangements for her marriage, strongly disapprove of her fascination, to say the least. Defying her parents’ wishes, Sacha flees her home and launches an adventure-filled quest toward the Great North in search of Oloukine and his ship.

Sasha is the daughter of St. Petersburg aristocrats. At fourteen she is not seeking marriage. Instead she wants to find out what happened to her grandfather, Oloukine, whose ship disappeared on an expedition to the North Pole. She thinks those searching for him used the wrong route. However, no one believes her.

Previously sheltered Sasha decides to search on her own. Because she has neither skills nor money,her plan to follow her grandfather’s footsteps is difficult. She learns about people and the realities of life. She discovers the lost ship and Oloukine’s lost ship and diary then returns home to her family.

Every woman from childhood on knows there is more to life than romance. That is why I appreciate Long Way North. Its characters are genuine especially its heroine Sasha. It is her coming of age tales. How she faces life’s realities–danger, injury, death, arguments, threats, insults, drinking, smoking–and takes charge is the story with the moral: Don’t give up.

I think my daughter would love this one! Even my boys might.

This definitely seems like an empowering movie to watch with my girls, plus I am of Russian decent, so the cultural aspects are intriguing. Thanks for sharing!

DVD REVIEW – The Light Between Oceans