The product(s) featured in this post was provided free of cost to me. This post has not been monetarily compensated. Please note that, as always, any personal opinions reflected in this post are my own and have not been influenced in any way.
Some of the posts on this site, such as this one, contain an affiliate link. This means I MAY get paid a VERY SMALL commission if you purchase the product or service. 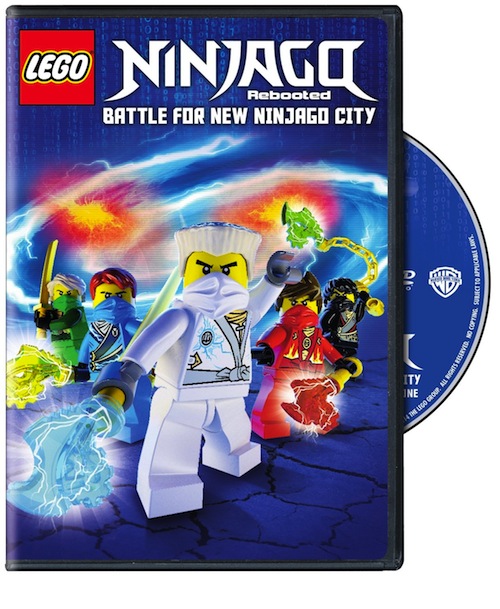 Here’s the LEGO Synopsis:
Victory in the Final Battle between the Gold Ninja and the Overlord has ushered in a new era of peace and begun a technological renaissance. Time has passed and the Ninja have become obsolete in this new hi-tech world. Just when they think all is safe in Ninjago, they’re called back into action when the reclusive inventor Cyrus Borg warns them the Overlord has survived as a digital virus and is trapped within the Digiverse. The Ninja will learn the Overlord seeks to steal Lloyd’s golden power to enable him to escape his digital prison and reign as the great prophesized destructor, “The Golden Master.” And to aid his villainous plot, he’s created a new technological menace more powerful than any foe the Ninja have ever faced – Nindroids. Episodes: “The Surge”, “The Art of the Silent Fist”, “Black Out”, and “The Curse of the Golden Master”.
Episodes include:
The Surge
The Art of the Silent Fist
Black Out
The Curse of the Golden Master
Only My Opinion:
Ninjago Rebooted, Battle for New Ninjago City’s all-LEGO design, fast paced bloodless action, well-delivered witty dialogue appeal to kids seven to fifteen. Familiar plots aside, Too bad that LEGO did not market this with the four episodes (The Curse of the Golden Master, Enter the Divergse, The Void, and The Titanium Night that continue the story on to its conclusion. Despite familiar plots, young audiences genuinely enjoy seeing ninja especially in combat.