How Old Is Too Old To Go Trick Or Treating?

written by Valerie, Mom Knows It All
9 comments
FacebookTwitterPinterestEmail 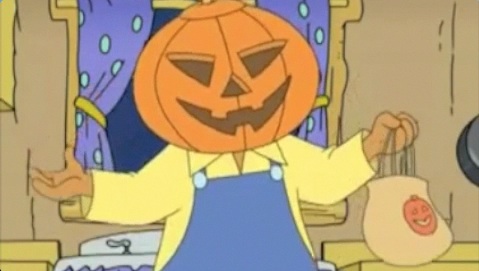 We had a pretty slow night here, as far as trick or treating goes. We’ve had years where we must have seen 200 kids. This year, maybe 25 – 30 tops. I know, 25! That’s nothing! I briefly wondered if somehow the kids were avoiding our house under the illusion that I was giving out freeze dried food or something, as opposed to the all time favorites that I’d stocked up on.

Throughout the night we had mostly individual trick or treaters, as well as two pairs and a couple groups of somewhere between five and eight kids. One of the groups came early on, it was a group of young people, either in their late teens or early twenties. One of them had a pillowcase on over his head, and that was his whole costume. (No, I do not mean that he was only wearing a pillowcase on his head and nothing else but his birthday suit. I mean he was wearing regular clothes along with the pillowcase. Maybe he wasn’t even in costume, maybe he just wanted to get a whiff of that Downy freshness.) Hubby immediately proclaimed them too old to trick or treat. After giving them candy that is – he was probably afraid he’d be mugged for his warheads. No, not nuclear warheads, you silly, the candy kind. I could understand his skepticism, after all two members of this group had two bags each – one for themselves and one for the supposed sick or otherwise ailing friend. (I’m pretty sure this is a scam. I personally think they were just stocking up their personal emergency food storage. Exams are coming up you know.) So. Back to the appropriate age for trick or treating. I asked him at what age it is that people should stop trick or treating. He had no answer. I told him I didn’t mind older kids trick or treating if they at least wore a costume. Or so I thought.

A short while later I was standing by the front door, trying to figure out where all of the trick or treaters were. I wondered if this is what Gladys Kravitz felt like. It’s at that point that I saw the tall man in the scream style mask. He was just walking around, talking on the telephone. He wasn’t with anyone and had no candy bag. Just the mask. I told hubby that I thought it was creepy. He looked and said sarcastically that the guy was probably walking around casing the neighborhood. Oddly, that’s exactly what I’d been thinking. Scaredy-cat that I am, I locked the storm door. Emergency preparedness of sorts. Which was silly since it was Halloween and the point was to give out the big bowl full of candy that we had next to the door. I decided that I was jumping to conclusions and unlocked the door.

We had some more children and some more teens. By 8:45 there was no sign of any children anywhere. It was like a ghost town. Where were they? didn’t they know that I had lots of sugar candy waiting for them? I’ve never had as much candy left over as I did this year. If candy were a survival food then we’d be set for a couple of years. It was at that moment that my son called and said he was ready to be picked up. He’d been trick or treating in another neighborhood with friends.

Out to the cold truck I went. As I sat in the truck waiting for a moment (for what I don’t know, I don’t have working heat), I noticed there was a small Jeep parked on the opposite side of the road. I couldn’t see the driver at all, the person had a white hood on. Why on earth would any grown person be wearing a white hood that completely covered their head and face at night? Was there some sort of nefarious club meeting going on somewhere in the area? Oh, wait, what’s he doing! He’s moving around with a purpose. I hope he isn’t going to whip out a gun. Oh. He’s taking his hoodie down. He’d probably just been warming up the car or something. I went on my way.

When I returned home my son and hubby were watching a Berenstain Bears Halloween episode. At the end of this episode Papa Bear sees the kids with candy apples. Learning that they got them from the Widow Jones, he makes a remark about her appearance, to which sister Bear reminds him that it’s wrong to judge people by their appearance. Papa Bear dons a pumpkin head, tells sister that she’s right and heads out the door, proclaiming “you’re never too old to go trick or treating, especially when candy apples are involved”.

So I ask you. At what age do you feel it becomes inappropriate to go trick or treating?

WW – Up Close With A Butterfly

What Kind of Vacationer Are You?

High School Graduation – So Many Emotions

I don’t know – if the kid is older than about 12, I really give the stink eye…. I can’t help it. 😛
I will say, though, that dressing up and going to family festivals at any age is fun! We went to 4 fall festivals over the past few days and there were tons of adults getting in on the action with really creative costumes.

The one thing that REALLLLLLLLY bugs me about teen trick or treaters is that they tend to be REALLY selfish. I mean… knocking toddlers down to get free candy. Yikes. That freaks me out!

I don’t mind older kids trick or treating as long as they’re in costume. I don’t like it when kids have more then one bag, it’s so greedy.

I believe that when someone becomes a teenager or 14, but getting that free candy is such lure to keep going. If someone is short enough to get away with it–well, I guess they can enjoy their candy.

My mom only had two groups of kids this year. She usually has around 50. Now me, I live in the sticks. Never had ’em, never will. One plus to living out in nowhere–save money on Halloween candy.

My oldest is 15 and he and a bunch of his friends went trick or treating together, proclaiming it the best Halloween ever because they all went in a group. I don’t mind Halloween, I love seeing the young kids all dexked out in their costumes. That’s probably why this year was a bit of a let down.

I xtocked up this year with loads of big bags of Doritoz and bigger bags of gummies. So few came–they were nowhere in sight in the neighborhood–thagt U wonder if they changed the day. Even at the parade in the next town the size of floats and costumes was less elaborate–sign of the times and the economy.

I like those things, what are you doing with those leftovers? LOL. We wondered if more people were going to the parade. I also wondered if recent weather had anything to do with it but last night wasn’t bad. There was a ton of candy in stores yesterday, the markdown sales will be plentiful today.

We saw plenty of kids in our town this year, our trick or treating lasts from 6-8 and we drive in from the country to walk around town with our kids. Our 11 year old walked around with us and a friend. Our son is 16 and he went with a small group of his friends, most of them were dressed up and they were still excited about walking around. I think it’s fine for the older kids to go as long as they’re being respectful and they have to dress up!

A lot of the adults in our area dress up as well weather they’re with their kids or not so I really don’t think anything of seeing lone big people walking around!

Maybe 13 or 14? But that doesn’t mean they can’t take their little cousins or siblings out in order to milk it a little longer. 😉