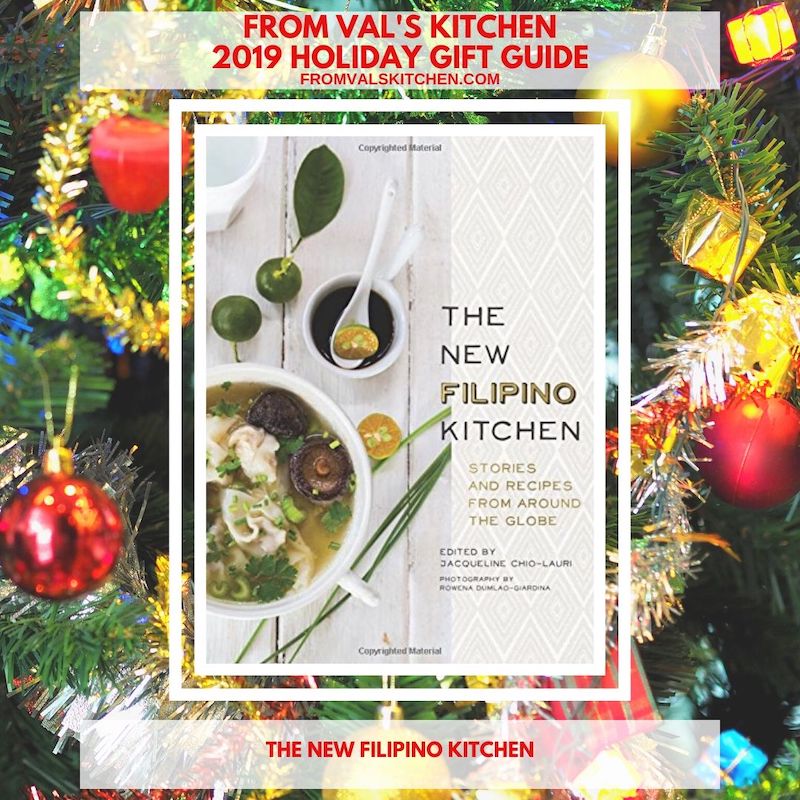 My stepmother-in-law was Filipino. There was always something interesting going on in her kitchen. She brought her family’s recipes over here to the US. Some of the recipes stayed almost the same as when she was in the Phillipines. Others had to be adjusted due to a difference in ingredient availability and money here in the US. Each time we had a dish for the first time we almost always heard a story with it. In The New Filipino Kitchen cookbook, the folks that contributed the recipes to the cookbook not only shared their treasured recipes, but also the stories that go with them. The New Filipino Kitchen would make a great holiday gift for anyone that enjoys Filipino food as well as those who enjoy trying new recipes from other cultures.

The New Filipino Kitchen: Stories and Recipes from around the Globe

You may not realize that Filipino Americans are the second-largest Asian American group living in the United States, especially when you compare the number of, say, Japanese, Thai, and Korean restaurants to Filipino ones. There’s a lot of speculation about why Filipino food hasn’t taken off the way other Asian cuisines have, but one thing’s for sure: there’s something for everyone here.

Lauded as the next big thing by the likes of Anthony Bourdain and Jonathan Gold, Filipino food can be somewhat difficult to define, as it melds indigenous dishes with myriad foreign influences from Chinese and Spanish to South East Asian and even American. And as Filipinos have left their archipelago and set down roots all over the world, it has proven to be a highly adaptable cuisine, lending itself to different diets, preferences, and ingredients.

The New Filipino Kitchen collects 30 recipes and stories from expat Filipinos, all of whom have taken their favorite dishes with them, preserving their food memories and, if necessary, tweaking their recipes to work in a new environment or, in the case of some chefs, a more modern context. With contributions from the White House executive chef Cristeta Comerford, Bocuse d’Or Norway winner Christian André Pettersen, 2015 MasterChef New Zealand runner-up Leo Fernandez, five-time Palanca Award winner and poet Francis Macansantos, and the “Food Buddha” Rodelio Aglibot, this is a multifaceted, nuanced introduction to the world of Filipino food and food culture.

Jacqueline Chio-Lauri has more than eight years’ experience in the food industry opening and managing restaurants at deluxe hotels, such as Shangri-La and Sheraton. While working in Dubai, she was one of the five young women professionals featured in Emirates Woman magazine’s special report “Why the Future Is Female.”

Her writing has appeared in anthologies and compilations such as Chicken Soup for the Soul: Find Your Inner Strength and Tales of Our Lives: Fork in the Road. Her website, My Food Beginnings, was created to fire up an appetite for Filipino food worldwide. The New Filipino Kitchen, her first book, won the Sunshot Prose 2017 Finalist Prize before it was published. She currently lives in the United Kingdom, her seventh country of residence.

Here’s a recipe for  from the cookbook, excerpted with permission from the publisher. 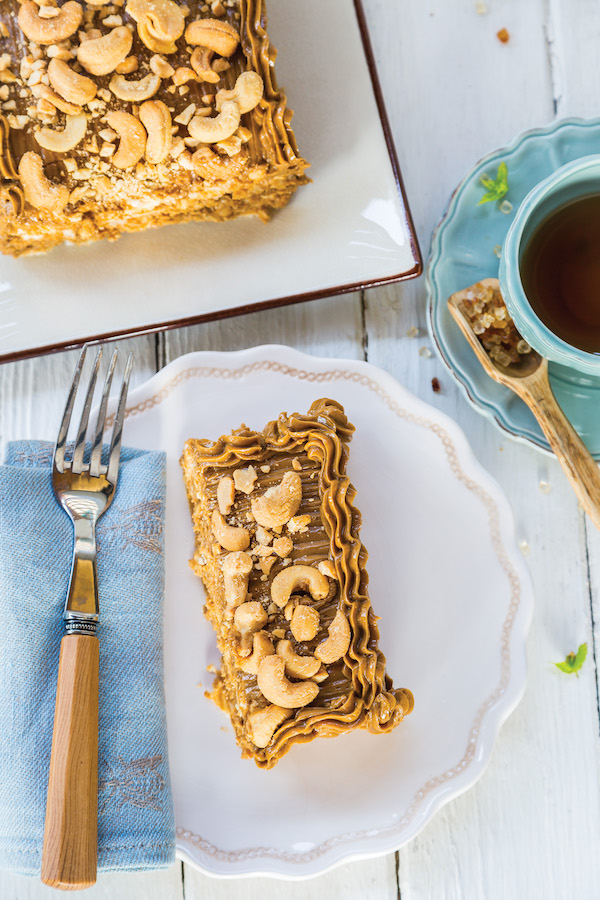 Sans rival is a Filipino dessert made of layers of meringue, buttercream, and cashews. It comes from a French phrase that means “without rival” and has its roots in dacquoise. It is very rich, so it’s usually served in small slices and best eaten with a cup of good coffee. Classic sans rival is vanilla flavored. As a coffee lover, I wanted to combine these flavors to give it a different spin.

Preheat the oven to 350ºF. Grease four to six baking sheets. Line with parchment paper. Grease again and then flour the paper. Set them aside.

Make the meringue: In the bowl of a stand mixer fitted with a whisk attachment or using a handheld electric mixer, beat the egg whites on high until fine bubbles appear. With the machine running, gradually add the sugar and beat until stiff peaks form. Gently fold in the cashews. Add the coffee extract.

In batches, bake for 25 to 30 minutes, until the meringue is lightly brown.

Remove from the oven and transfer the parchment paper with the meringue to wire racks to cool completely.

Make the buttercream: In a small nonstick saucepan, heat the sugar and water over low heat until the sugar is completely dissolved and the liquid is threadlike in consistency.

In a large mixing bowl, beat the eggs until frothy and light yellow. Slowly add the sugar mixture to the beaten eggs. Stir in the butter cubes until fully incorporated. Add the coffee mixture and mix thoroughly.

To assemble, cut or shape the meringue sheets to your preference (circular shapes tend to have a lot of waste). Determine the number of layers you want (at least 4 layers is good, but you can always add more).

Create the first layer by laying down a meringue sheet. Spread some of the buttercream over it and sprinkle with some of the cashews. Repeat this process until the desired number of layers is achieved.

This looks like such a great book! I love Filipino food so would love to try some at home! Those recipes look great!

Such a lovely book and it would definitely make a lovely gift! The cake you’ve recreated looks and sounds just amazing.

I’m not familiar with Filipino cooking but that cake with meringue and cashews looks delectable! It will make for a great dessert this holiday season!

Thanks for the review of your book – I’m always looking for new recipes to try, and this book sounds fabulous!