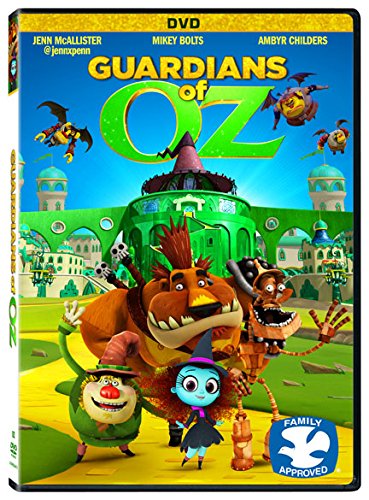 Wicked witch Eviline (Ambyr Childrers) tries to steal back the broom that holds her powers, but Ozzy (Mikey Bolts), a kindhearted flying monkey, snags it instead. Hoping to rescue his father, Ozzy joins forces with cheeky young sorceress Gabby (Jenn McAllister). But can they find the Lion, Scarecrow, and Tin Woodman–and lift the enchanted spells Eviline has imprisoned them with? Visionary animator and Golden Globe nominee Jorge Gutierrez (The Book of Life) continues the enchanted saga of Oz in this dazzlingly funny family adventure.

Behind the Scenes of Guardians of Oz

Guardians of Oz is a sequel to The Wizard of Oz. Good Witch Glinda removes Eviline, TheWicked Witch of the West’s power, places it in a magic broom, and gives it to Lion, Tinman, and Scarecrow. Then she gives Eviline another chance.

Too bad Eviline has not changed. Her Flying Monkeys battle and defeat the citizens of Oz, regain her broom, and banish Lion, Tinman, and Scarecrow. So it is up to Tiny Flying Monkey Ozzy and Glenda’s niece, apprentice witch Gabby to save Emerald City. The pair manage to defeat her, save Glinda as well as Ozzy’s transformed father, and make right the bad Eviline has done.

Guardians of Oz is more than a good cartoon.  Kudos for Mars in developing Mexican and Indian talent.  With solid voice-overs (Mikey Bolts, Ambyr Childers, and Jenn McAllister), it does not screen as foreign film.  It is an amusing  contemporary telling; it is totally entertaining family fair.

Ok I am a HUGE Wizard of Oz fan how did I miss this one! I need to grab it for movie night with the kiddos. I think they would all like it!

My family and I enjoy watching The Wizard of Oz, so seeing the sequel only seems natural. This animated film looks like a lot of fun!

I just watched this the other day. Both of my girls loved it!!