The product(s) featured in this post was provided free of cost to me. This post has not been monetarily compensated. Please note that, as always, any personal opinions reflected in this post are my own and have not been influenced by the sponsor in any way. 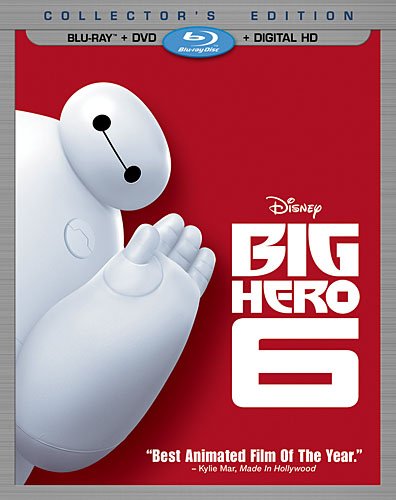 With all the heart and humor audiences expect from Walt Disney Animation Studios, “Big Hero 6” is an action-packed comedy adventure that introduces Baymax, a lovable, personal companion robot, who forms a special bond with robotics prodigy Hiro Hamada. When a devastating turn of events catapults them into the midst of a dangerous plot unfolding in the streets of San Fransokyo, Hiro turns to Baymax and his diverse group of friends— adrenaline junkie Go Go Tomago, neatnik Wasabi, chemistry whiz Honey Lemon and fanboy Fred — who transform into a band of unlikely heroes. Bring home Disney’s “Big Hero 6,” featuring comic-book-style action and hilarious, unforgettable characters — it’s fun for the whole family!

Hiro is a teenage genius. He spends his time creating battle-bots and finding illegal bot-fights to compete in. He’s finished school and has no interest in going to college. No interest at all – until he visits the college his brother Tadashi attends. After visiting the lab on campus where his brother created a personal healthcare robot named Baymax, as well as the projects other students are working on, he decides he must attend.

Hiro learns from Professor Callaghan that in order to gain admission to the school Hiro must enter a new project at an upcoming robotics expo at the college. He creates microrobots that can function alone and join together. Everyone is totally impressed and the event ends on a high note. Mogul Alistair Krei even offers to buy the microbots, an offer that Hiro declines based on advice that Callaghan gives him. Until Hiro and his brother leave the building. When the building is on fire, Tadashi rushes back in to save the professor. Sadly, he doesn’t make it back out.

Hiro sinks into great sadness, unwilling to even go to the college, which he had been accepted to. He accidentally injures himself in his room and Baymax appears. Baymax tried to make Hiro feel better, as he is programmed to do. When Baymax sees how intrigued Hiro is by the discovery of a microbot trying to go somewhere he sets out to find out where the microbot is going. Together Baymax and Hiro find a warehouse with containers full of the microbots. Someone has stolen the microbots and is creating more.  This prompts Hiro to wonder if the fire at the college was deliberate. When the duo is discovered by a masked man they escape an attack of microbots and head to the police station. The police do not believe the story and Hiro is left on his own to figure out what’s going on.

Hiro and Baymax go back to the warehouse, only to find that it has been emptied. They track the microbots to the docks. As Hiro is contemplating how to proceed Tadashi’s friends come and disrupt him, as they are worried at how removed he’d become. The whole gang is discovered, and chased by an army of microbots and the masked man. Hiro realizes that in order to fight the masked man and the army of microbots he’ll need to make some changes. He upgrades Baymax, and gives each member of the group a specially designed suit that gives them a special capability. The group sets out to find the masked man, and solve the mystery of the microbot army and the fire at the college.

Hiro and the gang find the masked man on a deserted military base on an island. They discover that the masked man is not Krei as they suspected – instead it is none other then Professor Callaghan. Callaghan had used Hiro’s microbots to shield himself during the fire. Callaghan has been planning a plot of revenge an accident that had happened years before during an experimental teleportation test, causing him to lose his daughter when she entered a portal. Hiro is so hurt and angry that he commands Baymax to destroy Callaghan. But, that goes against the programming Tadashi had created. Callaghan gets away.

The next day the goup of students goes to an event that Krei is holding, where Callaghan makes an appearance. Callaghan opens up a portal over the crowd, promising to ruin Krei’s life as Krei ruined his. Krei’s building slowly starts coming apart and getting sucked up into the portal. Hiro and Baymax determine that there is a live person in the portal- Callaghan’s daughter. They go in to rescue her, hoping to save her as well as to put an end to everything. Baymax is damaged and can’t go back through the portal. Once again Hiro must say goodbye to someone he loves.

Hiro finally begins going to college. He’ll be working in the same lab his brother had shown him. He brings the one piece of Baymax that he has with him, a fist shaped hand. He discovers Baymax’s programming chip. Using that he’s able to recreate Baymax. He and Baymax, along with his group of fellow students, are now able to work together as a group fighting for a good cause once again if the need arises.

Big Hiro 6 has great color, graphics and animation. I really enjoyed the storyline a lot. I actually consider the movie ideally suited for ages tween to adult. While really young children might appreciate the colors and such I don’t believe they’d truly understand the storyline, which deals with death, sadness, loneliness, and revenge. The movie is a lot of fun, and has a lot of humorous moments as well.

How To Save Money While You Live The Carefree Lifestyle

#PinkUpYourLunch With Chicken Of The Sea

We’re absolutely in love with Big Hero 6. If you want an example, consider this. My daughter is a Disney princess fiend, and yet she said that Big Hero 6 was her favorite movie.

We saw this in the theater and will definitely be adding it to our home collection. Didn’t realize it was out already!

I begged for a copy of this and used it for my #DisneySide party! Of course they all loved it. And so do we, it is already on my tablet through Disney Movies Anywhere!

This is one movie I really do want to get on video. We all loved this one in the theater.

My son actually got this for his birthday, so the boys watched it for their sleepover. It was my first time seeing it as well and we all enjoyed it.