COOPER® Make it Yours Recipe Contest 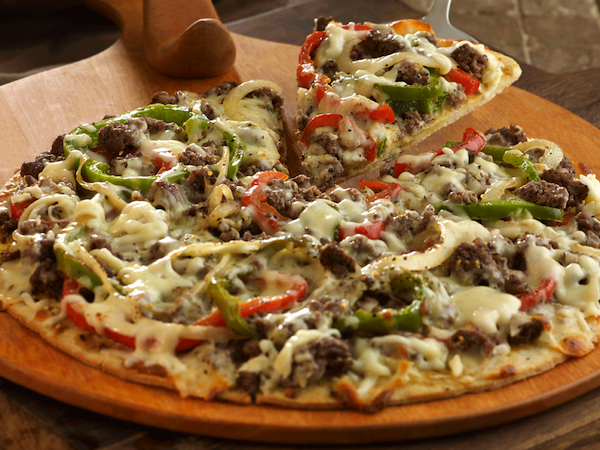 Doesn’t that pizza look amazing? I didn’t make it. The photo is from the folks at Cooper cheese. All that ooey, gooey cheese makes my mouth water.

Pizza is one of the most popular foods here at the Jersey shore. We love our pizza. I’ve been told by many people that pizza in other areas of the country is nothing like the pizza that we have here in our area. 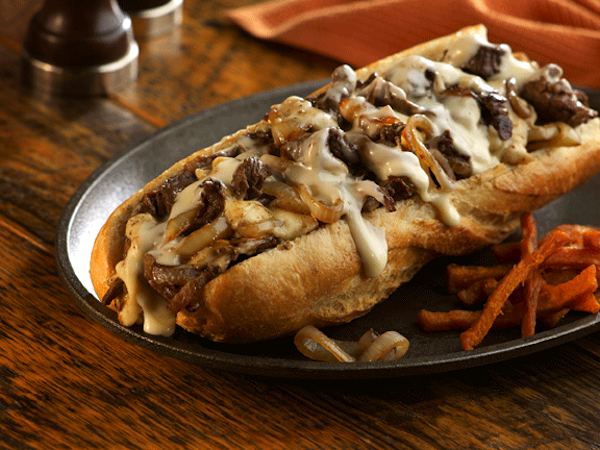 Philly Cheesesteak. I didn’t make that either. Once again, Cooper Cheese has struck, leaving me pondering the blend of steak and melty cheese and salivating on my keyboard.

Philly Cheesesteaks are another really popular food in our area, probably partially because we’re only an hour out of Philly. It’s also just because it’s a delicious sandwich. In fact, a Philly Cheesesteak is one of my oldest son’s absolute favorite things to eat.

We don’t have a ton of money, so we don’t eat out all that often. I make my own versions of dishes at home, many of which include cheese. I love cheese. My whole family loves cheese. It’s one of the items you can always find in my fridge in one or more forms. I use it in many of the dishes that I make. It’s on almost every sandwich that I make. Hubby actually teases me from time to time, saying that I don’t know how to make a dish that doesn’t have cheese. Of course I do! I just choose not too, because cheese is just so yummy!

A popular cheese in my area is Cooper Cheese. Cooper Cheese has been around since 1893, when I.C. Cooper, a prominent banker from Teresa, New York, began selling aged cheese under the Cooper label. In 1945, the Cooper Victory label (C.V. Sharp) was developed in honor of World War II veterans. Cooper Cheese is a proud supporter of Operation Homefront.

Made with the goodness of real milk, Cooper is made with hand-selected, high-quality American cheese that’s aged between 100-180 days. The distinct aged flavor really makes meals come alive – from burgers and subs to mac ‘n cheese, and everything in between. Cooper has three different types of sharp cheeses: White, Yellow, and Black Pepper available at deli counters. Customers can locate the store nearest to them by using the product locator. 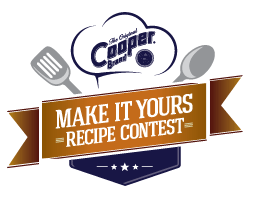 Cooper is currently holding the Make It Yours Recipe Contest, which runs through July 31, 2015. It’s a fun contest, and a wonderful opportunity for people like you and I to share our favorite recipes in the hopes of winning a prize. Speaking of prizes, there are some really nice ones!

To enter the contest, create a recipe using Cooper Cheese and up to 11 other ingredients. then, take  a picture of your original Cooper dish and submit it with your contest entry. You can enter the contest on Facebook, or by regular mail if your entry is postmarked by July 31, 2015.

The contest is open to legal residents who are eighteen (18) years of age or older and reside in the following states where COOPER® cheese is distributed at the time of submission: Connecticut, Delaware, the District of Columbia, Florida, Georgia, Maine, Maryland, Massachusetts, New Hampshire, New Jersey, New York, North Carolina, Ohio, Pennsylvania, Rhode Island, Vermont, Virginia, and West Virginia, (the “Entrant”). Void outside of CT, DE, DC, FL, GA, ME, MD, MA, NH, NJ, NY, NC, OH, PA, RI, VT, VA, and WV, in US territories and possessions located outside of the United States, Puerto Rico, and wherever else restricted or prohibited by law. See the official contest rules for more details.

What’s your favorite recipe that calls for cheese? Would you enter it in the contest?

Chill Out With A Verizon FiOS ® #CustomTV Viewing Party #ad

Check Out This Deal On Jack Link’s Beef...

Save On Jack Link’s Beef Jerky With This...

Save $1 on McCain Veggie Taters With This...

Geez, those photos just made me want some pizza lovin’ right now! I’ll be checking that contest, the prizes are too amazing to let pass!

You put two of my favorites together. I love pizza & Philly cheesesteaks. (I know what I’m eating today). Haha! Thanks for sharing!

The pizza and Philly Cheesesteak sandwich look delicious. This sounds like an awesome contest.

Well, I am not much of a cook and I have cut cheese out of my life (for the most part), due to the ridiculous amount of calories, but I would happily be a judge of these recipes and cheat on my diet! haha. This cheese really does sound delicious. That pizza and philly cheesesteak does look quite appetizing!

Your recipe looks mouth watering indeed and I just want to reach out and try and cheese slice! nothing better when cheese is melted so is ooey and gooey! Cheese always makes me food day!

I make a mean lasagna, so I think I would make that with this cheese. It sounds like an awesome contest!

You really are a cheese lover! Hmm..I like a lot of the ones you mentioned. I typically don’t eat a burger without cheese on it. I love mac and cheese and different pastas too. Pizza is a favorite in my house as well. I grew up on the Jersey shore so I definitely know what you mean.

It’s so hard to pick just one that I’d love! I guess I would have to go with my Spicy Asian meatball subs, the cheese on that definitely brings the whole meal up a notch!

I am fairly certain I don’t have any meals that are without cheese! haha! We are huge cheese lovers and eat it all the time!

I love pizza! Those pictures make me want it even more now. Hopefully that answers the question haha. 🙂

It does sound good to me. I haven’t had a good philly cheesesteak in a while. A nice aged cheese does make a huge difference.

Those pictures look amazing! I am starving now, and it’s no fair posting such delicious pictures with yummy cheese when I don’t have any here! I will have to check out the contest, it sounds so fun.

Ooh, I love cheese on almost anything. That pizza does look so yummy.

I don’t cook very often being single-just throw something together usually. Cheese is one of my favorite foods–I always have cheese in my apartment and snack on it a lot!! I’ve not tried this brand and will look to see where it is sold near me.

Omg the things I would do for that philly cheese steak right now!!!! This definitely sounds like a great contest!!

Yummm! I just had dinner but could definitely make room for that philly cheese steak 🙂

What a great recipe contest! All of that food looks amazing and would be a great.

Mmm, your recipe looks amazing! This looks like a really fun contest! I’m getting inspiration just looking at these!

Lasagna. No–too many ingredients, time, cost for it to be practical for busy homemakers.

Oh man — those pictures look amazing! Unfortunately, we don’t have this type of cheese in our area, but if we did I would be buying it up!