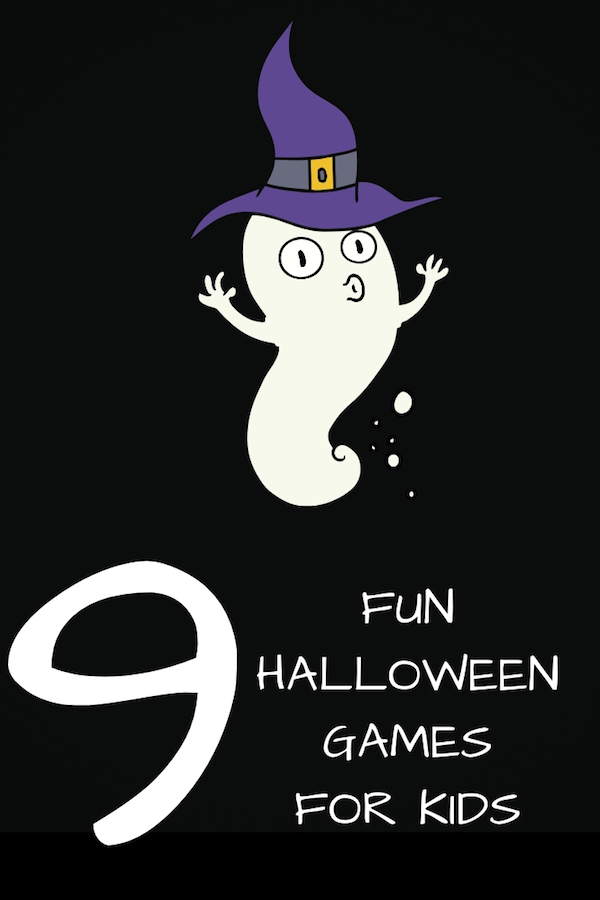 Besides trick-or-treating and costumes, Halloween parties are one of the many things that kids look forward to each Halloween. If you are thinking about hosting a Halloween party for kids this year, one thing that you will need to think about is the games.

When planning kid’s party games, keep in mind that many games don’t take very long. So, be sure to play enough games that the kids are busy for a decent period of time. If you don’t want to use candy for prizes, Halloween party favors and small toys also make great prize ideas.

Here are 9 fun Halloween games for kids that are perfect for the weeks leading up to Halloween. All of these games use items that you may already have on hand in your home, or can easily make or get.

You don’t need anything to play this game except the kids. This game is a variation of the well known “I’m going on a picnic” game. The first player starts by saying “I’m going on a picnic and I’m bringing _____”, using a word beginning with the letter A that somehow relates to Halloween. The next player repeats the beginning part of the sentence, then repeats what the first player said and then adding their own item starting with the letter B. The game continues until all of the letters in the alphabet have been used, or until all players but one are out. A player is out when they cannot remember all of the items they’re supposed to repeat.

For this game you’ll need some chairs, white sheets, and paint. Almost everyone is familiar with the game of musical chairs, so you probably won’t need a detailed expression of the rules. All you need is one chair less than the number of kids attending the party (so 9 chairs for 10 kids, for example). Cover the chairs with white sheets and paint some eyes and mouths on them to make them look like ghosts. Line the chairs up or arrange them in a circle. To play the game, play some fun or spooky Halloween music while the children walk around the chairs. When the music stops, the child left without a chair is out. Remove a chair, and keep playing until there is only one child left.

For this game you need fun Halloween music. All of the players dance. When the music stops the players need to freeze and hold that postition until the music restarts. Children that don’t freeze are eliminated. The last player standing is the winner.

For this game you’ll need some old men’s clothing. Divide the children into small teams, and give all teams some clothes for their scarecrow. Jeans or overalls, flannel shirts, boots, gloves, and a straw hat are typical, though you can use whatever you have on hand. One child in the team is the scarecrow, and has to stand still while the others of the team put the clothes on. The first team to complete a scarecrow is the winner.

Pin The Nose On The Jack-O-Lantern

For this game you’ll need cardboard, construction paper, scissors, and paint or glue. Create a large pumpkin out of cardboard, or make one out of construction paper and pin it to a bulletin board. Paint or glue eyes and a mouth on the jack-o-lantern, leaving the area where the nose should be empty. Cut out several yellow triangles, writing the child’s name on the front and placing a small piece of double-sided tape on the back. Blindfold children and have them attempt to pin the nose where it belongs. To make the game more difficult, spin the child in circles several times before having them pin the nose on.

For this fun variation of hot potato you’ll need a small toy pumpkin. The players gather in a circle and pass the pumpkin around while a song plays. When the music stops, the player holding the pumpkin is out.

For this game you’ll need bags of candy corn, some Halloween bowls and some plastic spoons. Players take a spoonful of candy corn from one end of the race course to the other, dropping the candy into the bowl. Players may not use their hands. This game can even be turned into a relay race.

For this variation of the Easter egghunt game you’ll need lots of small plastic pumpkins. You could also use orange construction paper and cut pumpkins out. Hide the pumpkins in the yard or party area before the children arrive. The child that finds the most pumpkins in the specified amount of time wins.

Almost any child’s party game can be converted to a Halloween game with a little creativity. Of course, leave plenty of time for snacks and the ever-popular costume contest.

Save On fairlife At Peapod This Month!

6 Cleaning Hacks Everyone Should Know