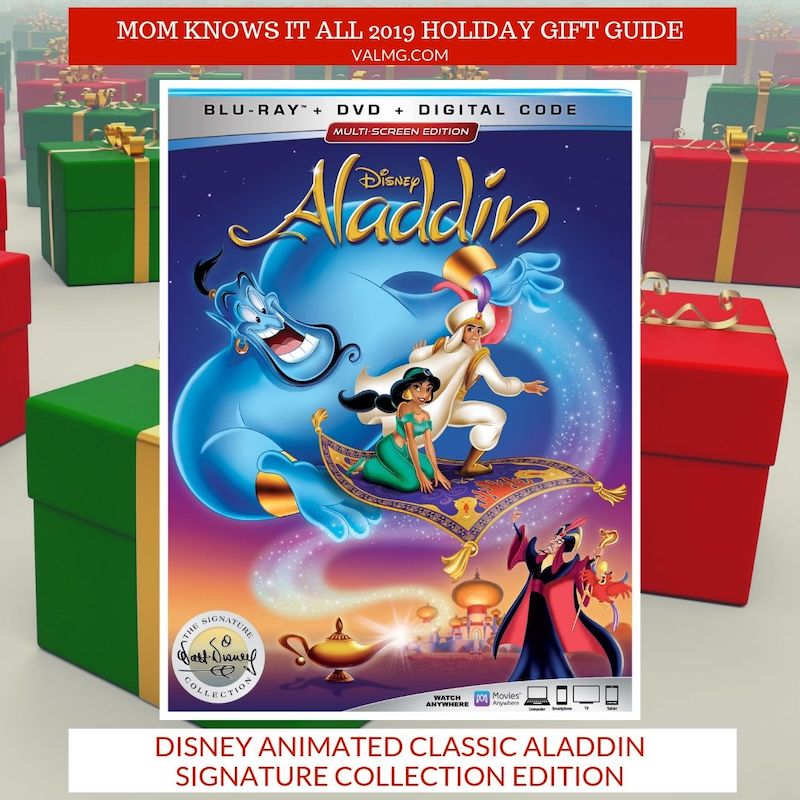 The animated classic movie Aladdin is one of my favorite animated movies from Disney. (Not that I can pick just one LOL.) This classic film will delight older fans that saw it when first released, as well as new fans that haven’t seen it yet. Great animation, bright and bold colors, a great storyline, and a sense of humor are just some of the things that make this movie a classic for all ages.  It is a must have for any Disney movie collector.

The Signature Collection Edition invites every member of the family to join Genie, Aladdin and Jasmine to belt out the unforgettable songs from “Aladdin” — such as “A Whole New World,” “Friend Like Me” and “Prince Ali” — through a new sing-along version. Other fresh features include a walk down memory lane with Scott Weinger (speaking voice of Aladdin) as he reflects on his personal journey portraying the diamond in the rough and meeting with the original cast and filmmakers, and one jump into the recording booth during the original recording sessions. Digital exclusive features legendary animator Eric Goldberg reminiscing about drawing Genie. Also included are hours of classic bonus gems, from hilarious outtakes with the legendary Robin Williams (voice of Genie) to an in-depth discussion with directors John Musker and Ron Clements.

Disney’s tale of the lovable “street rat,” Aladdin, self determined Princess Jasmine and the all-powerful Genie has remained a family favorite for over a quarter of a century. It all began with the animated classic “Aladdin,” the highest-grossing film of 1992 and a two-time Academy Award®–winner, and continued with the hit Broadway musical “Aladdin” and 2019’s live-action film adaptation “Aladdin,” directed by Guy Ritchie and starring Will Smith as Genie, Mena Massoud as Aladdin and Naomi Scott as Jasmine.

Families can decide how, when and where they wish to enjoy “Aladdin” in their households. The film arrives two weeks early on Digital 4K Ultra HD and HD with an exclusive extra — and a Digital bundle doubles the fun with both the Walt Disney Signature Collection Edition and this year’s thrilling, live-action adventure “Aladdin.” A physical copy of the film will be released as a 4K Ultra HD™ (4K Ultra HD™, Blu-ray™, and Digital Code) and a Multi-Screen Edition (Blu-ray™ and Digital Code).

“Aladdin” is the 10th title to join the Walt Disney Signature Collection, which includes groundbreaking films created or inspired by the imagination and legacy of Walt Disney, featuring timeless stories and characters that have touched generations. The film takes its place alongside “Snow White and the Seven Dwarfs,” “Beauty and the Beast,” “Pinocchio,” “Bambi,” “The Lion King,” “Lady and the Tramp,” “Peter Pan,” “The Little Mermaid” and “Cinderella.”

Thanks! My nieces are going to love this!

Such a fun movie! Loved the review!

This is one of my all time favorite movies! Love this post!

Thanks for breaking down everything that comes with the signature collection. Totally want this now that I know about all the bonus features!

This is a great gift idea! Thanks for sharing!