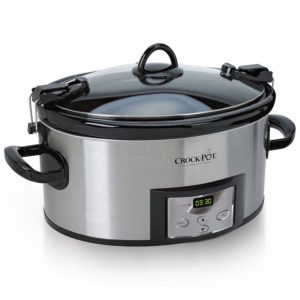 A slow cooker is a small electrical cooking appliance used to simmer and cook food at a lower temperature than other cooking methods.

There are a number of factors to consider when purchasing a slow cooker. Some models have metal handles built into the unit while others don’t. No matter which type of slow cooker you buy, you want to be sure the lid fits well. Ideally the lid can lock into place with a latch on or near the handle. Many slow cookers have a built-in indicator light, which lets you know the unit is on.

Some of the other things to keep in mind are:

Slow cookers come in several shapes – round, oval and rectangular. Round is the most common. If you’re going to be cooking casseroles. lasagnas or large meals you’ll probably want to consider an oval or rectangular slow cooker. The oval and rectangular models do take up a bit more counter room but provide more versatility so you can use them to make more dishes.

One of the advantages of using a slow cooker is that cheaper cuts of meat that are usually tougher can be used, as the slow cooking process breaks down tougher meats and results in a tender finished meal. Also, because of the ability to cook using low heat under low power, meals don’t have to be closely atched, and some people even use them to cook while they’re away from home. It’s harder to burn foods since the food is cooking at a lower temperature than other cooking methods. A wide variety of dishes can be prepared in slow cookers.

One of the disadvantages of using a slowcooker is that foods can be forgotten and therefore overcooked.

Wondering what to make in an a slow cooker? There are hundreds of slow cooker cookbooks!

Southern Pecan #Pralines are a classic #candy that